This Lab’s Hilarious Reaction To His Embarrassing Mom Is Everything

He's a very good doggo that lives with his people in the suburbs of Pittsburgh.

When he's not "eating sliders from Arby's" or fetching newspapers from his family's front yard, Carson loves chest scratchies — and he's not shy about letting you know it (press play to watch video).

Something Carson is bashful about? People fussing over his birthday.

In an update posted to Twitter, one of Carson's humans, Matt, shared hilarious pictures taken by his mom to mark a major milestone: The pupper's 12th year on planet Earth!

My mom just sent me a text of our dog celebrating his birthday and he's literally rolling his eyes pic.twitter.com/mi1DVVRahU

Speaking with BuzzFeed News, Matt revealed that "my parents have a really good sense of humor and I think they just like to send us funny updates."

"He [Carson] has a face with a lot of personality, so every now and then ... he looks ... annoyed by the whole thing," he adds.

But like most "teens," Carson's studied indifference is just a front.

"IMMA TRYIN TO KEEP IT LOWKEY"

This really good boy is actually a huge cuddle bug with a heart as golden as his coat.

I mean just look at that face.

10/10 animal lovers would boop his snoot.

Such handsome, so playful.

Then again, a review of Matt's Insta shows it wouldn't be the first time Carson tried to bail on a group portrait.

Does your dog love being the center of attention? Tell us about it in the comment section below! 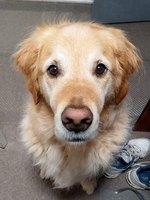 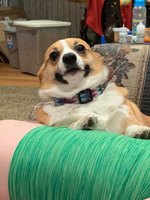 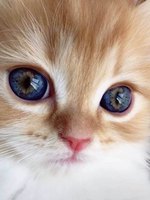