Pets have been an integral part of human life for literally thousands of years. In the past, animals were domesticated because they could help perform important tasks — like retrieving or herding or hunting. Today, though, most pets don't have jobs to do in our homes. Their main jobs are being adorable and loving us unconditionally.

What's more, keeping a pet can be relaxing when they're being good, but when they're acting up, they can cause tons of stress. Whether they're behaving well or not, pets can be expensive to keep (especially in the Instagram-worthy lifestyles we want to keep them in).

WOOF: WHY ARE DOGS SO LOYAL TO HUMANS?

In a new interview with The Washington Post, anthrozoologist and animal expert John Bradshaw explains why we still keep pets around when their costs and benefits more or less cancel each other out (that is, the comfort you get from petting your furry friend is balanced just about perfectly by the emotional stress and financial cost they add to your life).

They make us more trustworthy.

"I think it's about a puzzling and unusually unique effect pets give to people, which is what I call the trustworthiness effect, which hasn't received a huge amount of attention in the press, but it has been replicated in studies in several different countries. People with animals, or as simply described as having a friendly dog with them, instantly become more trustworthy in the eyes of the person who's encountering that person or having that person described to them."

MEOW: HOW DO CATS CHOOSE THEIR FAVORITE PERSON?

They satisfy our need to groom.

"One answer is that there is this satisfaction — stroking a dog or a cat causes hormones to be released and makes the person doing it feel good. I think you can trace that back to our very ancient history as hairy primates. Grooming one another is the main glue that holds most primate societies together. Now we've got other ways of socializing, but somewhere deep in our brains is a need to do this grooming of something that's hairy, and we can satisfy that by stroking a dog or combing the cat."

They take the place of kids in a time when more and more people are delaying starting a human family.

"If it's not possible for somebody to have a child, or they feel that they're not ready because they haven't achieved what they wanted in their career, or they can only afford a small apartment and feel that a child should have a house with a yard, then I think that gap can be filled by an animal for a few years. It's a lot cheaper to buy your dog a Halloween costume than to get an apartment with one more room in it."

Would you like to learn more about what you're reading? Scroll through this article about what the pet you own says about you, and if you're convinced you're ready for a pet, then check out our adoption hubs for both cats and dogs.

Do Pomeranians Have Dander?

Should I Get My Cat a Water Fountain? 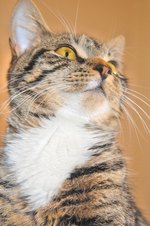 What Are the Benefits for Felines of Using Flaxseed Oil?

Are Dogs Good for Human Health? Here Are the Proven Benefits of Having a Dog

Turns Out Your Cat Is Way More Independent Than You Thought