Mildly spicy with a satisfying crunch, radishes are a beloved root vegetable that are found in dog-loving households around the world. In fact, radishes have been popular for centuries. Both the Greeks and Romans preserved radishes in a paste mashed together with honey, vinegar and salt. Ancient records reveal the Egyptians prized the radish for its pronounced peppery flavor, and begin cultivating the root as early as 2,700 B.C. — 300 years before the first Old Kingdom pyramid was erected in the Nile River Valley.

The first radishes were black. But after decades of crossbreeding, the radish now comes in many varieties and colors — red, white, purple, pink, yellow — and all are absolutely safe for dogs to eat.

Are radishes healthy for dogs?

Yes, dogs can eat radish. Radish is a member of the cruciferous mustard family known as Brassica. However, unlike many of its cousins, radish is a taproot, which means that dogs can eat the entire fibrous radish plant including its green top.

There are three main types of radish that are commonly found in Western grocery stores, gardens and kitchens: round radish, winter radish and daikon. All of these radish varieties are safe and healthy for dogs to eat.

Brimming with vitamin C and folate, radishes are a nutrient dense, low-calorie vegetable that are fat free. They're the perfect treat for dogs who are on pancreatic or diabetic diets, and dogs who are struggling with their weight. Radish is mostly composed of dietary carbohydrates, but they do offer dogs a small amount of protein.

Benefits of radishes for dogs

Radish is high in vitamin C, vitamin A and dietary fiber. It also contains a decent amount of minerals like calcium and iron. All of these nutrients help your dog maintain healthy digestion and a strong immune system.

Remove plaque from teeth
In addition to providing dogs with a satisfying crunch, the radish's fibrous exterior can help to gently remove plaque from a dog's teeth while chewing. Plus, the calcium and iron in radish will help keep your dog's teeth stay strong and resistant to bacteria.

Regulate blood pressure A Canadian study found a positive connection between high doses of vitamin C and reduced blood pressure in clinical animal trails. The researchers concluded that vitamin C has an anti-hyper-intensive effect on mammals and reduces their vascular sensitivity. While certainly not a cure for high blood pressure or hypertension, radishes can help dogs maintain healthy blood circulation by providing increased nitric oxide bioavailability.

Promote gastrointestinal health Radish is largely made up of dietary fiber, which keeps your dog's digestive system flushed and functioning regularly. Radish is also a natural diuretic, and they may ease any burning sensations for dogs who are experiencing discomfort during urination.

Anti-Cancer Properties Promising research points to the chemo-preventive properties of radish. In a study published in The Journal of Plant Food Nutrition, radish root inhibited cancer cell growth and even induced cell death in some cancer lines. While more work needs to be done in the apoptosis-inducing properties of radishes, early evidence shows that these powerful, peppery vegetables can be beneficial for both dogs and humans.

How to prepare radishes for dogs

As with any new food, introduce radishes to your dog slowly over a period of 1-2 weeks. Regardless of the type of food, new additions to a dog's diet can cause upset stomach, digestion discomfort and even diarrhea. So begin slowly by feeding your dog a few small pieces of radish, and observe him or her for any signs of allergies or discomfort.

Dogs don't need radish as part of their diet. Nonetheless, since it is a low-calorie, fat-free food, radish is a welcome addition to dogs who need to lose weight or for dogs who are on pancreatic diets or diabetic diets.

Try chopping a radish into small bits and sprinkling on top of their regular meal. Radish can also be sliced thinly and frozen for a cold snack on a hot day. Avoid feeding your dog an entire radish — it's always best to cut it up into easily digestible bites to avoid choking or intestinal blockage.

Are there any concerns with feeding dogs radishes?

Aside from the normal concerns with any food — allergies, choking or gastrointestinal blockage — radish is fairly innocent and harmless to your dog.

However, radish is mildly spicy, and many dogs do not respond well to distinct, fiery flavors. So, despite the many benefits of feeding radish to dogs, never force your pup to eat one.

With faithful dogs at their sides, humans have been cultivating radishes since the dawn of civilization. Truly, dogs have been safely eating radishes alongside their human counterparts for centuries. Do not be alarmed when your pup accidentally gets into the radish patch in your garden or sneaks a few from the vegetable bowl on your kitchen counter. Radish is not toxic to dogs. In fact, radishes are a healthy snack for the dog in your life! 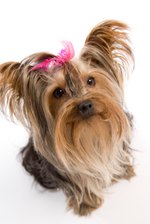 What Fruits & Vegetables Can Yorkies Eat?

What Do Wild Geckos Eat?