The year — and the decade! —has drawn to a close.

But like Indiana Jones reaching back for his hat as he slides under a trap door, a new meme has beat the countdown clock to provide the internet with the frivolous entertainment it craves.

It emerged, naturally enough, on Twitter where @pleasantchime challenged her followers to "describe your cat on these axes."

One scale was bookended by "Victorian orphan" and "aristocracy," its intersecting counterpart "polite" and "bastard."

Like the best memes that challenge you to self-identify, this one quickly spiraled beyond the woman's 535 followers and responses, the best of which are collected below, piled up on the microblogging platform.

1. "Tabby 1 - shelter rescue who is lacking in many manners but ultimately a sweet girl. Tuxedo - most refined dandy doesn't like going outside prefers sleeping. Tabby 2 - spends days outside alone, surly, grumpy, swats at tabby 1 when she tries to be his friend."

2. "Belladonna Maria is a born aristocratic arsehat, complete with pedigree. Daphne Maria was born in a bogan house. She has learnt bad habits from the other one ... but overall she's the more polite..."

3. "Leona sits on the tops of the cabinets and looks down on her humans bustling around the kitchen and once she gets tired of sitting tries taking down the christmas tree and eating the lightbulbs — bow to her glory"

4. "Character development: My old Norwegian Forest cat started out a pure Viking marauder, quick of fang and claw, but mellowed over the course of 18 years to an elder statesman who generously presented his belly for tribute pets from his office on the front steps."

6. "This is THE most perfect meme i have seen"

7. "Pidge, who was literally eating breadcrumbs in the street when we rescued her. Now a spicy sausage."

10. "His name is Blue. He was a stray and decided he wanted to live with us about a year ago, despite our allergies and our not being cat people. Turns out we are Blue people, though."

12. "Hotspurr is the red dot. Accompanied by photo of my impish prince"

14. "She's tricksy but deep in the aristocratic bastardized realm, from a long lineage of adopted barn cats."

16. "Very sweet and lovely, the princeliest of orphans… but also the most cold blooded murder churro I have ever met. We had a serious mouse problem shortly after moving into our current apartment. HAD."

All my cats are right bastards what even is that "polite" vector for https://t.co/2c5Glo8cyx

Where does your kitteh fall on the prince vs pauper spectrum? Tell us about in the comments below or on Facebook!

11 Newly Adopted Senior Cats That Will Melt Your Freaking Heart 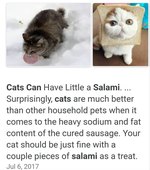 Can Cats Really Have a Little Salami, As a Treat?