Complications From Tick Bites on Dogs

Ticks are more than just an annoyance to your dog -- ticks can make him, you, and any other pets in your home sick with a variety of serious diseases. Preventing infestation is the best line of defense against tick-borne illness, accompanied by regular grooming to find and immediately remove any ticks on your dog.

Ticks spread blood-borne illnesses between animals as they bite and move on . Lyme disease commonly spreads via ticks and can affect both dogs and humans. The classic first sign of Lyme disease is a red bull's-eye circle around the site of the bite. It may appear right away, within a few hours or more than a month later. Symptoms in dogs include lethargy, lack of appetite, muscle stiffness and sore joints. In humans, the symptoms are flulike, including chills, fever, lethargy, stiffness and soreness, as well as a red rash.

A tick can infect a dog with Rocky Mountain spotted fever, ehrlichiosis and babesiosis. Without proper treatment, the resulting illness can kill a dog. Symptoms common to each of these illnesses includes lethargy, lack of appetite, weakness and difficulty moving. It can take up to two weeks or more for signs of illness to appear. If you find a tick on your dog and he shows any signs of being sick, or doesn't act like his usual self, take him to the veterinarian and let the doctor know your dog was exposed to tick bites. It is possible for a single tick to infect your dog with more than one illness at a time.

If enough ticks infest your dog at a time, they can consume so much blood that the dog will become anemic. He simply no longer has enough red blood cells in his bloodstream to carry oxygen to his organs and muscles. Signs of anemia include pale gums, lethargy, weakness and, in serious cases, rapid heartbeat. Anemia is a symptom of other tick-borne disease such as babesiosis. Seek veterinary treatment even if you successfully remove all the ticks to determine whether the anemia was caused by blood loss or illness.

If a tick isn't removed properly, the remaining head can cause a skin infection around the site. It may appear as a raised red bump, which may be warm to the touch. An ulcer at the bite site can be an indication of Lyme disease, though, so check with your veterinarian if a spot appears at a site of a bite. The itching and irritation caused by ticks moving around on your dog's body while they find a place to feed can cause your dog to scratch relentlessly, which can lead to irritation and open wounds that eventually give way to skin infection. The skin may appear red, swollen and moist. It may smell bad. If you suspect a skin infection, contact your veterinarian.

About the Author
Carlye Jones is a journalist, writer, photographer, novelist and artisan jeweler with more than 20 years of experience. She enjoys sharing her expertise on home improvements, photography, crafting, business and travel. Her work has appeared both in print and on numerous websites.

Symptoms of Spider Bites in Dogs

Can Ticks Harm Dogs Even After They're Removed?

Signs of Rattlesnake Bites in Dogs 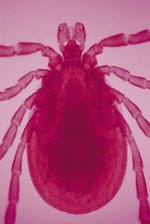 Why a Dog Has a Lump After Tick Removal

How to Get a Tick Off a Dog