What Does it Mean If a Dog Won't Lie On His Back?

If Rover won't roll over, several factors could be behind this reluctance. It could be the time and place, physical reasons, or it could just be Rover's nature. Assuming this posture is easy for some dogs, difficult for others and impossible for a few.

First, you should understand that the supine position in the dog world means complete trust -- going belly-up exposes his most vulnerable parts and leaves them unprotected. To a frightened dog, it means he's in danger of being hurt. To a dog in pain, it might be physically unbearable. Or, you may just have a dog who just doesn't find the position a very comfy one!

A dog with trust issues -- one who has been abused, neglected or rejected -- finds it difficult to even lie down or stretch out on his side for a human, never mind roll onto his back. The only way around this is to build the dog's confidence in a human with kindness, rewards and unlimited patience. Hand-feeding is a good way to begin, so that the dog sees the human as a source of good things. Soft touches, body massage and grooming advance this conditioning. It's a matter of asking, never demanding or hurrying, until the dog is willing to respond.

With his more acute senses, a dog is aware of much more in his surroundings than any human. If he senses or even imagines anything present as a threat or even a distraction, he will find it difficult to give a human his attention. If there's too much stimuli in the environment, your dog will definitely not want to be on his back where he can't spring up and run (to give chase or to find safety) in a split second. The successful dog handler begins training a behavior, such as rolling over (which is a good test of having a dog's undivided attention), in a quiet environment and progresses there until the behavior is well established. Once this is accomplished, he then brings in controlled outside stimuli, such as another human or another dog. With practice, the dog can eventually learn to focus on the lesson while ignoring that squirrel in the tree.

A dog who is reluctant to roll onto his back should have a medical checkup to be sure there is not some physical reason preventing him from doing so. Rolling requires a dog to lift his head and rotate it over his shoulder, and very muscular breeds with short necks sometimes have difficulty rolling over just because of the way they're built. The dog may have a temporary problem, such as a sore back from unusual or excessive activity, or he may have a bone or joint issue, such as a slipped disc in his spine. Even if he's physically sound, rolling on a hard surface can put pressure on sensitive areas, so work on this on turf or carpet or a similar firm but resilient surface -- maybe his very own yoga mat.

About the Author
Martha Adams has been a rodeo rider, zookeeper, veterinary technician and medical transcriptionist/editor. She traveled Europe, Saudi Arabia and Africa. She was a contestant on "Jeopardy" and has published articles in "Llamas" magazine and on the Internet. Adams holds a Bachelor of Arts in English and anthropology from the University of Texas at Austin.

How to Care for a Dog With a Broken Back 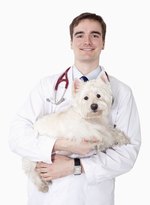 Why Does My Dog Pace in Circles?

22 Cats and Dogs with the Most Squishable Faces

Symptoms of Colic in a Dog

Mental Effects of Abuse on a Dog