Here's What Happens When 1,000 Ducks Commute To Work At The Same Time

One South African winery has gotten its ducks in a row — literally.

That's the story from Vergenoegd Wine Estate in Stellenbosch (a city of 155,000, roughly 30 miles southeast of Cape Town), where more than a 1,000 Indian Runner ducks parade through the grounds twice daily.

The processions, which date back to 1984, are surprisingly orderly. After they are released from a gated pen at 9:30 in the morning, the ducks scoot en masse along a gravel path that skirts the property's centerpiece: a stately white manor house. Five hours later, they make the return trip back.

These ducks do it for the Vine
credit: Vergenoegd Wine Estate / Instagram

While they rarely break formation, employees with flags are on hand to direct any strays back to the flock.

Why all the fowl-ly fuss? The 140-acre farm is plagued by white dune snails that come ashore from the nearby South Atlantic Ocean. If left unchecked, they — and other pests — would pick the vineyard clean.

In an interview with NPR, Marlize Jacobs, a manager and winemaker with Vergenoegd, had this to say:

"After winter, the vineyards bud... Those buds are succulent bits of food and snails love to eat them. If we don't control them, they will absolutely destroy the vineyard."

Because Indian Runner ducks stand upright, they can slip easily between vines and nom on any snails that have inched up the trunk.

In fact, the ducks' voracious appetite has allowed the farm to transition almost entirely to sustainable and environmentally friendly farming practices that curb the use of pesticides.

A secondary benefit derived from this unique arrangement? Lots of love for the vineyard and the duckos on social media!

Watch the feathered farmers waddle to their "office" in the video embedded below!

These Endangered Baby Ducklings Are Too Ducking Adorable

How to Make Pellets for Feeding Tilapia 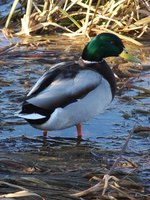 Signs That a Duck Is Ready to Lay Eggs

How to Raise Lady Bugs