This hilarious cat named Minnie vocally answers back when asked if she's hungry.

The tone behind her meow is up for interpretation but there's reason to believe she's saying "Yeah, no duh I'm hungry." Sometimes to put emphases on her response, not only will Minnie meow back, she'll throw herself to the ground and roll on her back, indicating "Thank god you asked me in time, I was about to die of starvation!" It's pretty hilarious, as Minnie is visibly not starving and very well cared for.

But before we write Minnie off as a little drama queen, she's quite the team player. She swaps food for bath duty.

Minnie's got a real "you scratch my back I'll scratch yours" mentality, or perhaps better stated, she lives by the motto "You feed me, I'll lick your forehead." And really, that's all any cat owner can ask for.

Don't Put Food Down Around This Sneaky Cat Bagel-ar

Stop Everything And Look At These 15 Chubby Kittens Right Meow!

16 Cats Who Just Saw A Ghost 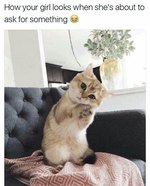 18 Silly Pictures Of Cats & Dogs To Bring You Smiles