About Brewer's Yeast for Dogs

Brewer's yeast is a common nutritional supplement for dogs. Some breeders recommend it, but consult your vet before feeding it. It may not be suitable for your dog because of its potential as an allergen. Here's what you need to know to decide whether or not brewer's yeast is right for your dog.

Brewer's yeast is a type of nutritional yeast used as a canine supplement. Yeasts are one-celled fungal organisms that consume sugars, produce carbon dioxide and alcohol as by-products. Yeasts are used to bake bread, brew beer and make wine. The strain used in most brewer's yeast supplements for dogs is Saccharomyces cervisiae. Some brewer's yeast supplements are made from by-products left over from brewing beer. If you feed it, look for a high-quality product made for dogs using fresh ingredients.

Brewer's yeast has several uses for dogs. It is a source of B vitamins such as biotin, trace minerals such as zinc, proteins and amino acids. The amino acids and vitamins can help make a dog's skin healthier and its coat shinier. Brewer's yeast is often recommended by holistic vets to help strengthen dogs' immune systems. According to the Encyclopedia of Natural Pet Care, brewer's yeast was shown to protect chickens from salmonella-tainted feed. Brewer's yeast is also a common natural remedy for dogs with fleas, recommended by holistic veterinarian Richard Pitcairn. It is believed to work against fleas because it contains sulfur compounds that make your dog less palatable to them. However, at least one study showed that brewer's yeast provided dogs no protection against fleas when compared to a control group.

Brewer's yeast is sold as pills, tablets and as a powdered supplement that can be sprinkled over food. The nutritional content of the yeast is not standardized and will vary depending on how yeast was grown. Compare labels to ensure that your pet is getting the most benefit from the product. There is a difference between premium brewer's yeast supplements and supplements made from the by-products of the brewing process. Yeast that has been grown specifically for use in supplements has more nutrients and is less likely to cause allergic reactions.

The Side Effects of Brewer's Yeast for Dogs

How to Make Dog Perfume Spray

Is Diatomaceous Earth Safe For Pets? 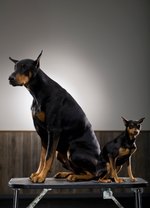