How to Take Care of a Teacup Yorkie Puppy

The American Kennel Club does not recognize a distinction between the Yorkshire terrier and a teacup Yorkshire. The breed standard states the Yorkie should not weigh more than 7 pounds. However, teacup puppies have been bred to be smaller than the standard and may weigh only 2 to 3 pounds when mature. These tiny pups require extra care and attention due to their increased likeliness for health problems.

Your teacup Yorkie is so small he'll only be able eat a tiny amount of food at one sitting. Offer food to him throughout the day, gradually increasing the amount as he is able to ingest more. Feed him only a high-quality puppy food designed for small breeds; ask your veterinarian for special recommendations to address your puppy's unique health concerns.

Yorkies require daily brushing and frequent trips to the groomer.

Brush your Yorkie's teeth daily; his breed is prone to periodontal disease, which results in painful, expensive dental intervention. Yorkie pups commonly retain their milk teeth, which should come out around 5 months old. If your pup doesn't lose a baby tooth by the time the adult tooth emerges, visit your veterinarian.

Yorkies are sociable and love their people. They shouldn't be left alone for long periods of time or they become nervous and destructive. If you must be away for more than a few hours, consider taking your puppy to day care or hire a dog sitter to visit during the day.

Even tiny teacup Yorkshire terriers tend to think they're the biggest dog in the room. They're suspicious of strangers and aggressive with cats or dogs they think are threatening. Keep a close eye on your puppy when he's around unfamiliar animals so that his big ego doesn't result in a serious injury.

Teacup Yorkies get cold easily. Avoid taking your puppy outside during winter months. Housetrain indoors with puppy pads, otherwise he may associate going to the bathroom with feeling cold and miserable.

All Yorkies are delicate and can become injured easily. Teacup Yorkies have fragile bones and are so tiny that they are more susceptible to serious, or even fatal, injury.

Responsible breeders do not recommend Yorkies for homes with small children. Children should not hold or carry your teacup Yorkie. You'll also need to take care while playing with him. Never play with your pup on an elevated surface such as a couch or table; even a small drop can be fatal to your fragile puppy.

Teacup Yorkies should wear a harness in lieu of a collar. A harness moves leash tension from the neck to the chest, resulting in fewer neck injuries. Thread a jingle bell onto the harness so that the family is aware of the puppy's movement and can avoid accidentally stepping on him.

Puppies are born with fontanels, a soft spot in the skull where the bones haven't grown together. Fontanels typically close by 6 weeks old; this can take longer in Yorkies. Sometimes fontanels don't close, resulting in a permanent hole in the skull, which leaves the puppy's brain more prone to injury. Be extra careful when touching your teacup Yorkie's head around the fontanel.

Teacup Yorkies, like all teacup dogs, are more likely to have genetic disorders. This is due to breeding practices such as breeding the runts of litters. Some breeders focus on producing the smallest dogs possible, knowing that many people, will pay more money for a tiny dog. However, litter runts often have medical problems, which is why they're smaller than their litter mates. Breeding runts leads to the propagation of genetic disorders, which results in even more unhealthy dogs. Both the American Kennel Club and the Kennel Club in the United Kingdom discourage the breeding practices associated with teacup dogs.

Owners of teacup Yorkies should be alert to hypoglycemic episodes. Tiny puppies are easily stressed and tend to eat only small amounts of food. Their blood sugar can drop rapidly, which causes confusion, dizziness, even coma and death. If your teacup Yorkie pup exhibits these symptoms, rub some corn syrup directly onto his gums, and seek immediate emergency care. Why My Yorkie Shakes

What Are the Causes of Seizures in a Yorkie? 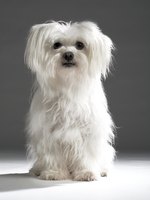 What Is the Life Span of Maltese Dogs?

How to Take Care of a Shih Tzu-Yorkie Mix Puppy