How to Check a Dog's Gums

Dog owners are the best health advocates for their friends. Weekly grooming sessions can help establish a health baseline for a dog, as well as track any changes in their condition, lumps and bumps, or other issues that might arise. Knowing what is normal can help dog owners determine when their dog needs veterinary care, and whether the situation is an emergency. Evaluating a dog's gums is a quick and easy part of a health assessment.

A dog is getting his teeth brushed and checked.
credit: JimVallee/iStock/Getty Images

The most obvious aspect of a dog's gums is the color. Normal gums are a healthy pink color, although some dogs may have spots or dark-pigmented gums. Pale gums could be due to anemia, internal bleeding or low blood pressure. White, gray, blue or purple gums result from a lack of oxygen in the blood, and could be the result of respiratory, circulatory or heart problems. Gums that have a yellow or orange tint indicate jaundice, a liver issue. Bright red gums are a sign of increased blood flow and may be due to dehydration or heatstroke. Red, puffy gums can be a sign of gingivitis or tooth decay.

Texture of the Gums

While checking their dog's gum color, dog owners also should pay attention to how the gums feel. Gums should be firm to the touch and moist or slimy. If the gums are puffy, there may be an underlying infection of the tissue or teeth. Dry or tacky gums indicate dehydration.

When to Call the Vet

Abnormal gum color usually is cause for concern, although there are exceptions. The gums turn dark pink or red when a dog has been running or playing vigorously, for example. Some puppy's gums are normally a paler pink than their adult counterparts, however worm infestations can cause anemia in puppies, which also would cause pale gums. The total gum picture will give you a better indication of the severity of the issue. For example, red gums that are still moist with normal capillary refill time, in a dog who hasn't been exercising, could indicate mild dehydration that may be remedied by encouraging the dog to drink water. Bright red gums that are dry and tacky with delayed capillary refill time, on the other hand, might indicate severe dehydration or heatstroke and a veterinary visit is probably a good idea.

Other symptoms also should be considered. Abnormal gum color, feel or capillary refill time combined with lethargy, lack of appetite, vomiting, diarrhea, fainting, exercise intolerance or other abnormal behaviors should be evaluated further and warrant at least a phone call to the vet. Dog owners who are proactive in monitoring their dog's health may be able to address issues before they become problematic. 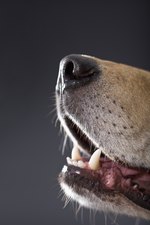 What Do Brown Spots on My Dog's Gums Mean?

My Dog's Gums Are Purple

How to Tell If a Dog Is In Shock

How to Determine When Dog Panting is a Bad Sign

Signs a Dog Has a Toothache