What Is the Difference Between a Pug & a Bulldog?

They may look similar with their pushed in faces and deeply wrinkled foreheads, but the pug and the bulldog are two distinct breeds, each with a unique history and distinguishing characteristics of his own.

The pug likely originated in China, where his role was to serve as a beloved companion to the Tibetan Buddhist monks. During the 1500s, traders introduced pugs into Holland, where the little dogs became the choice companions for members of the Dutch royal family. As the pug's presence spread to France and England, he proceeded to delight the royal courts of these nations. In 1885, the American Kennel Club officially registered and recognized the pug as a member of the toy group.

The bulldog, who is often referred to as the English bulldog, originated in England. He did not share the pampered existence of the pug. The bulldog was utilized primarily for bull-baiting in sporting arenas roughly 500 years ago. Once this vicious practice was outlawed, breeders dedicated their efforts toward mellowing the bulldog's temperament from aggressive attacker to loving companion. The American Kennel Club officially welcomed the reformed bulldog into the non-sporting group in 1886.

The pug is the largest breed within the toy breed group. His average weight ranges between 14 and 18 pounds. The bulldog is much heavier, weighing between 40 and 50 pounds. The pug and the bulldog are both clad in short, smooth and shiny coats that require minimal grooming. A pug's coat is either solid black in color or fawn with a black muzzle and black markings on the ears. Bulldogs are available in a wider selection of colors, including red, white, fawn, brindle and piebald.

Both of these breeds exhibit large heads and undershot jaws, but those of the bulldog are much more pronounced. The bulldog has a prominent dewlap. The pug's eyes are large and protruding, while the bulldog's eyes are deep set. The pug's tail curls up tightly over the dog's hindquarters, but the bulldog's short tail may be either straight or curled inward like a corkscrew. The bulldog has short rose ears, and the pug typically has short button ears. The pug has longer legs than the bulldog, whose physique is defined by a low-slung torso and shorter legs. Both of these dogs have deep facial wrinkles and brachycephalic, or pushed in, faces.

A Pair of Personable Personalities

Finding the differences between the pug's temperament and that of the bulldog presents a challenge. Today's bulldog is a lover, not the fighter from his bygone era. The pug and the bulldog are both amiable companions who are outgoing toward strangers and get along exceptionally well with children and most other household pets. The bulldog is a dignified charmer who is content to occupy the couch. The pug is more energetic, playful and entertaining.

Both breeds possess a stubborn streak with which they will challenge their owners from time to time. Prospective dog owners who are seeking an affectionate family member who requires only minimal exercise may need to base their decision more heavily on the appearances of the pug and the bulldog since their personalities are remarkably similar. It is no wonder that the two breeds have both remained among the top 35 most popular breeds on the American Kennel Club registry.

The bulldog and the pug share a few health concerns, one of which is known as brachycephalic airway syndrome, a condition that results from the pushed in facial structure and shortened airway. This condition places both dogs at a high risk for heat stroke. Another health problem that these two breeds share is patellar luxation, a condition in which the knee joint pops in and out of place. Both breeds also have elevated risks for periodontal disease due to malocclusions and dental crowding in their mouths. Hip dysplasia, a deformity of the hip joint, has been noted in both dogs.

Due to the globular and protruding presentation of the pug's eyes, they are susceptible to injury, corneal ulceration and dry eye. Some additional health conditions that can afflict pugs include:

Some health conditions that affect bulldogs include:

With an owner's efforts of maintaining their dog's healthy weight, practicing a home dental care routine and pursuing regular veterinary checkups, the pug's average life span ranges 12 to 14 years. Even with the same diligent care, however, the bulldog's average life span is notably shorter at 8 to 10 years.

The Life Expectancy of an English Bulldog

Which Breeds of Dogs Are Closest to the Wolf? 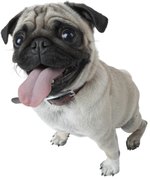 Which Dogs Get Along with Pugs?

How Long Do Puggles Live?