What Do Plecostomus Eat?

The plecostomus, also dubbed "pleco", is a type of freshwater catfish, often used in ornamental tanks. Plecostomus are commonly called "sucker fish," a nickname derived from the fish's eating habits. Primarily algae eaters, plecostomus will "suck" the surfaces of their environments in order to obtain food. Despite the seemingly vegetarian behavior, these fish are actually omnivores, occasionally eating scraps of meat.

In naturally occurring freshwater ecosystems, plecostomus will consume the algae that grow on rocks, aquatic plants, and wood. Accordingly, plecos generally have plentiful access to food. Not only are their diets balanced between the nutrition of the algae and the fiber of wood, but also plecostomus will eat scraps of meat from deceased creatures occasionally.

Plecostomus are known for their ability to clean the glass walls and decorations of fish tanks by eating the algae that naturally grows in that environment. Plecostomus-containing tanks should not be cleaned of algae because this is the most natural, sustaining food for wild plecostomus. However, clean excess algae if a plecostomus does not attend to it after significant time.

While plecostomus will obtain nutrition by consuming the algae that accumulates in a tank, an owner should supplement the fish's diet, especially if the glass is regularly cleaned. There are a variety of options for creating a balanced diet for a plecostomus, listed below.

To feed a plecostomus, use normal commercially available fish food. A plecostomus will eat flakes that have fallen to the floor of the tank. If other fish eat the flakes before they have had time to descend, the plecostomus will be fine. In fact, plecostomus can learn to swim up during feeding to consume flakes before they have fallen. However, if competitor fish continue to eat the floating flakes, switch to a pellet form of commercial fish food. The pellets can be the generic type but also come designed for bottom-feeding catfish, which is a more desirable food choice for plecostomus.

Plecos can eat many of the same vegetables that humans eat. For example, you can put small pieces of zucchini, cucumber and squash in a tank and expect a delighted plecostomus. The vegetables can be raw or blanched, but do not use pieces that were cooked with any oils or seasonings. Additionally, leafy greens such as lettuce serve as an excellent food source for plecostomus. You can purchase a food holders for fish tanks or you can make an apparatus to weigh the food down.

You can place a piece of driftwood into the plecostomus tank to greatly benefit the fish's diet. Wood easily collects algae and acts as a source of fiber.

Captive sucker fish also benefit from the implantation of a real plant into the bowl or tank. Aquatic plants are available at almost any pet store. While a plastic plant serves as a source of algae formation, real plants provide a more balanced diet and more readily collect algae.

What Do Eels Eat?

What To Feed Sucker Fish

What Do Dragonfish Eat?

Information on Sucker Fish for Aquariums 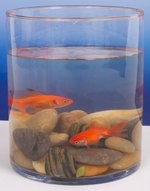 Aquarium Fish That Will Eat Planaria