How Fast Can a Border Collie Run?

For generations, the border country between England and Scotland has been home to sheep. Shepherds developed sheepdogs to herd sheep in the rugged environment. Speed was critical for a dog to keep the flock moving in one direction, dart off to bring in a stray and patrol for danger on the same run. In 1876, sheepdog trials were introduced in London. Amazed spectators watched as dogs quickly handled and penned wild sheep. Shepherds guided the dogs by hand signals and whistles.

The Border Collie does the work of two to five human herders with its quick and agile movements. The dog tirelessly roams, watches and circles to manage the herd. In agility competitions, the dog is guided by voice commands because it quickly outruns its handler. Search and Rescue groups use the Border Collie to locate missing people because the dog covers rubble quickly and climbs ladders or searches tunnels with alacrity.

The Border Collie is easily trainable and affectionate, though often wary of strangers. The dog is nimble, turning in its own length while running. This makes it so dominant at agility competitions that Anything But Collies (ABC) competitions have been established to encourage other breeds. The dog is high in stamina and has about a 12-year life span.

A typical Border Collie is a medium-sized dog that is usually black and white, but may be tricolor such as black, tan and white. The dog is usually 18 to 22 inches tall at the shoulder. It may weigh 30 to 60 pounds. The head is moderately broad and slopes down to a tapering muzzle. Ears are often erect or semi-erect. The eyes are brown, blue or merle in color. The dog may have a smooth or a rough coat with short or long feathery hair.

The Border Collie is not well-suited to small spaces or confinement. It needs room to run and play. The dog needs positive attention and becomes neurotic if neglected or mistreated. This breed is very intelligent and can find mischief or wreak havoc in creative ways if it goes not get enough exercise to work off pent-up energy. This dog is not recommended for homes with small children as the dog instinctively may nip children to herd them. 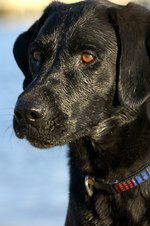 How to Train a Black Lab Dog 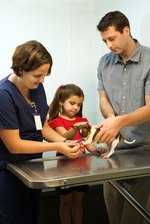 How to Make a Temporary Leg Brace for a Dog