Aging dogs are often affected by kidney disease. According to the Dog Health Guide, chronic kidney disease leading to renal failure occurs in four stages. The first two stages are characterized by a slow buildup of toxins in the blood. Unfortunately, clinical signs are usually present only during the later stages of the disease, which makes it very difficult to effectively treat kidney damage once it is diagnosed.

Chronic renal failure is usually undetectable until late in the second stage or early third stage when 65 to 75 percent of the dog's kidney tissue has already been destroyed, according to the Canine Kidney website. Some of the early warning symptoms are increased thirst and frequent urination. A veterinarian who examines the animal may discover that the dog's kidneys are either shrunken or enlarged. A blood test will reveal raised blood urea nitrogen (BUN) levels, meaning that too much of a waste product called urea nitrogen exists in the bloodstream. This is an indicator that the kidneys are not effectively filtering waste products. The dog may also have protein or crystals in its urine.

A number of other symptoms become evident as the disease progresses into the last stages. According to the Merck Veterinary Manual, the dog experiences weight loss, a loss of appetite, dehydration, vomiting and diarrhea, as well as ulcers of the mouth and a general lack of energy. The dog develops anemia during the later stages and its gums and mucus membranes become pale in color. Blood tests reveal increasing blood urea nitrogen levels. Potassium depletion may also occur. The dog's kidneys lose their ability to concentrate urine and poisons build up in its body. This leads to the development of atozemia, a form of poisoning that is caused by the kidney's inability to flush uremic poisons out of the system. Although toxins are present in the blood stream even in the early stages, they do not reach critical levels until the latter stages of the disease.

The Dog Breed Info website indicates that the lives of dogs with kidney disease can be prolonged through special diets that slow down the kidney's deterioration. Regular visits to the veterinarian and routine bloodwork provide an indicator of how well the dog is actually doing. However, the website warns that once atozemia reaches a threshold level, death is unavoidable. The dog progressively becomes weaker, more anemic and more lethargic as the poisons destroy the kidneys. Most veterinarians recommend humanely ending the dog's life through euthanasia at this point to alleviate its suffering.

How the Last Stages of Kidney Failure Affect Dogs 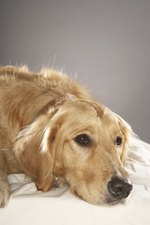 How to Treat Anemia in Dogs

What Causes High Ketones in a Canine?

Stages of Liver Disease in Dogs