Grooming Haircuts for the Bichon Frise

The Bichon Frise is a breed of dog that is known to be very friendly and energetic. The Bichon is small and sturdy, with white fluffy hair that looks like a cotton ball when brushed out. The hair of a Bichon grows constantly and does not shed, so you will need to brush and groom your dog frequently and thoroughly. There are several popular cuts for the Bichon. Which one you choose might depend on why you own a Bichon or what kinds of things it does on a regular basis.

The Bichon Frise has two coats of hair -- the outer coat is curly, and the undercoat is silky. The Bichon needs to be brushed out on a regular basis -- at least once per week -- to avoid mats. Mats usually need to be cut out with scissors once they form, since mats sometimes pull on the dog's skin and cause pain and irritation. Because they do not shed fur, the Bichon is considered an ideal breed for allergy sufferers.

The Bichon cut is also known as the show cut. It is the style that Bichons are required to have when competing in dog shows. This cut is much more time consuming than other cuts because of its longer length, but many Bichon owners consider it worth their time. To do a Bichon cut, you must use scissors only -- no clippers. The head cut is square and long, and the body coat is uniform, brushed out and several inches long.

The utility cut is an informal style worn by active Bichons that are only considered pets, and not show dogs. The purpose of the utility cut is to keep the hair short and out of the way, so that the dogs can play and go on outings without causing the owner too much worry about the fur getting matted or messy. A Bichon with a utility clip has close-cropped hair around the body and head.

The puppy cut, which is also called the pet cut, lies somewhere between the utility cut and the Bichon cut. It is longer than the utility cut, but a few inches shorter than the Bichon cut, and is thus easier to manage than the formal Bichon cut. Nevertheless, the puppy cut requires some time and effort, including brushing several times a week. Many pet owners choose this cut for its blend of attractiveness and manageability.

How to Care for Your Shih-poo Step by Step 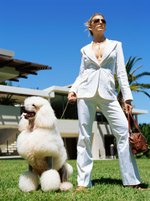 How to Groom and Clip a Peekapoo