Cats can't hop in the car and head out for a late-night snack when the fancy strikes them, but a well-behaved cat deserves an occasional treat. The grain-free phenomenon may have started a few years back when multiple cats became ill from tainted gluten in commercially produced pet food. While grains aren't dangerous, unless your cat is allergic, she'll get plenty in a well-balanced diet. For an occasional snack, consider a homemade grain-free kitty treat.

You can make simple grain-free cat treats in your own kitchen.
credit: Laks-Art/iStock/Getty Images

Combine the fish and potato flakes in a food processor. Puree until the mixture forms a doughy consistency.

Spread the mixture into an ungreased cake pan using the spatula.

Bake for 20 minutes. Fish should be springy to the touch.

Remove the cake pan from the oven, making sure to protect yourself with the hot pads. Remove the moisture from the treats using the following steps:

The pressure of the weight of the pan or casserole dish will force any remaining moisture from the treats.

Return the treats to the oven between the cookie sheets with the pan or dish in place. Bake for an additional 15 minutes.

Remove treats from oven and allow to cool.

How to Make Pumpkin Dog Treats 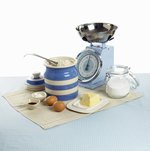 How to Make No-Bake Dog Treats

What's In A Nom? 200 Food Inspired Names To Give Your Cat