Dogs with congestive heart failure suffer a host of distressful symptoms, not the least of which is a frequent cough caused by fluid retention in the lungs. Allowing this liquid to stay in the lungs forces the heart to work harder and can throw the animal into respiratory and cardiac arrest. Using Lasix to control this build-up increases the life span of the dog and gives the patient better quality of life.

Lasix is the generic name for the drug furosemide, a routinely used diuretic in veterinary medicine. This drug works by prohibiting the retention of sodium and potassium in the dog's kidneys, leading to an increased urine output. This allows the kidneys to remove excess fluids from the body of the animal. It also works as a vasodilator in the heart and kidneys; dilating the blood vessels of both organs so that blood flows more freely and the organs become more functional.

Veterinarians usually prescribe Lasix for a dog diagnosed with congestive heart failure and is used primarily to relieve edema, or fluid build-up, in the lungs and abdominal cavity. This will relieve the coughing associated with heart disease. Lasix may also be used in the early stages of kidney disease but is usually discontinued after the disease progresses and the drug is no longer effective. An animal with electrolyte imbalances, such as high calcium and high potassium, may also be prescribed Lasix as it causes these chemicals to be eliminated in the urine. Lasix is distributed in pill form to pet owners but can be used as an injectable medicine in the clinical setting. When given intravenously by a veterinarian, the dog will usually urinate with five minutes.

The recommended dose of Lasix is 1 to 2 milligrams per pound of the dog's weight once or twice a day at six to eight hour intervals. The dosage may be increased or decreased depending on the severity of the disease and the veterinarian's diagnosis.

Because Lasix causes the dog's body to excrete normal potassium in the urine, electrolyte levels in the blood must be checked frequently. When potassium levels get too low, the dog's heart medication may fail and the animal could go into both heart and renal failure. Patients will also need to be monitored closely for a returning cough, and their liver and kidney function will need to be checked frequently by a vet.

Dogs on Lasix will urinate more frequently which may result in house soiling and asking to be taken outside more often. They may also experience some stomach upset and dehydration and will need to be seen immediately by their veterinarian if vomiting, lethargy or reduced urine output occur. Some dogs on certain antibiotics have experienced hearing loss associated with mixing the two drugs, but hearing often returns after discontinuing the Lasix. Concurrent use of both antibiotics and Lasix may also lead to kidney problems. In some animals, Lasix has been shown to interfere with the actions of other prescribed heart medications such as enalapril, which lose their effectiveness in controlling the heart disease.

How to Treat Pneumonia in Dogs Without Antibiotics 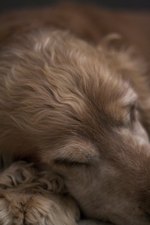 Side Effects of Clindamycin for Dogs

Can I Give My Dog Charcoal Tablets?