The Belgian Malinois (pronounced MAL-in-wah) gets his name from the Belgian city Malines, where residents are called Malinois. While the breed is sometimes mistakenly called the "malawa," the correct name is the Belgian Malinois. This breed is highly intelligent and fiercely loyal. They're often found working as police, security or search and rescue dogs, though they also can thrive as family pets.

The Belgian Malinois is one of four Belgian shepherd breeds who originated in 1885 when a shepherd bred two short-haired dogs for sheep herding. Beginning in 1896, the fawn-colored breed was actively promoted by a dog club in the city of Malines.

The Belgian police trained Belgian Malinois as the first dogs in their force. During World War I, Malinois worked as messengers, pulled small artillery carts and ambulance carts and helped the Red Cross. By the 1920s, Malinois kennels were popping up all over Belgium, with dogs being bred and shipped to countries all over Europe, South America the United States and Canada. The breed was added to the American Kennel Club in 1959.

A muscular, solid build makes the Belgian Malinois quite strong and agile, though he's not overly stocky. The American Kennel Club defines this breed as having the following physical characteristics:

The Malinois has a thick, fawn-colored double coat. His face is black, as are his ears. The tips of his hair are also black. He may have a small, white blaze on his chest and a white underbelly.

An average male Belgian Malinois weighs 60 to 80 pounds and stands 24 to 26 inches tall at the shoulder. Females are slightly smaller; 40 to 60 pounds, standing 22 to 24 inches tall.

Living with a Malinois

While they often work as drug or bomb-sniffing dogs, Belgian Malinois are friendly home companions, provided that their owners are prepare to train them properly.

Malinois have high energy needs and should be given plenty of opportunity to run, hike and play. This breed is a good fit for an active owner who is willing to bring his furry friend to the park or hiking trail. A sedentary owner, or one who works long hours would do best to find a different breed, as a Malinois can get bored and frustrated.

Special care should be taken to socialize Malinois puppies with humans and other animals; otherwise they can develop aloof, nervous personalities. A poorly trained Malinois may become aggressive. He's powerful and alert and can be quick to respond to perceived threats. An adult dog who has not been socialized with children should be introduced slowly, with proper supervision.

Because of his high intelligence level, the Malinois is adept at learning new tricks and correct behaviors. He's also agile and will thrive on games such as Frisbee, obstacle courses, fly ball and herding.

The average life span of the Belgian Malinois is 10 to 12 years. Potential health concerns with this breed include hip and elbow dysplasia and progressive retinal atrophy. Dysplasia occurs when the bones of the hip or elbow don't fit properly into the socket. The condition results in pain, arthritis and lameness. Hip or elbow dysplasia can be avoided by choosing a reputable breeder whose dogs are certified by the Orthopedic Foundation for Animals.

Progressive retinal atrophy causes blindness. The disease is genetic and avoided by choosing a breeder who does not breed dogs with this condition. Ask to see certifications from a veterinary opthamologist. 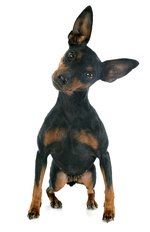 The History of Scottie Dogs

How to Train a Red Heeler