How to Potty-Train a Chinchilla

Chinchillas are small rodents from the Andes region of South America. Although most chinchillas are raised for the fur industry as their soft pelts are valuable, the use of chinchillas as pets has been growing in popularity since the 1960s. Chinchillas are primarily nocturnal and retain many of their habits from their years in the wild and are not always the most friendly of pets, but owners say animals acquired as babies, known as kits, and regularly handled and trained can be excellent pets. In this article you'll learn how to litter-train a chinchilla. While not all chinchillas can be trained to use litter for urination, many are able to do so if trained at a very young age. According to chinchilla owners and vets, it is not possible to train a chinchilla to defecate in a litter box as there is little to no resulting smell with which to train the chinchilla. 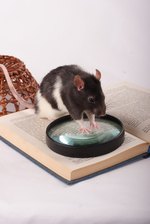 How to Litter Train Your Rat

How to Tell the Difference Between a Male & Female Parakeet

How to Litter Train a Rabbit

How To Remove the Smell of Urine From Rats