How to Tell the Difference Between Male & Female Catfish

Catfish have bony flat heads and cylindrical-shaped bodies. They live in freshwater in such areas as rivers and streams and are typically found near the bottom of the water. Catfish males and females, for the most part, look very similar unless you become familiar with what to look for. If you are looking to raise these fish or catch them you may want to know the difference between the two. You may want to avoid catching a female fish that is real plump since she is probably holding many eggs. When raising catfish, you will need to know the difference between male and female in order to make sure that they are able to procreate.

Look at the size of adult catfish. Male catfish are smaller and narrower than female catfish. The females can grow up to 1 inch larger than males.

Notice the width of the catfish body. Female catfish are wider than males by 1 1/2 inches in the belly area. The extra room is needed to carry many eggs. The female catfish is also rounder than the male catfish.

Check out the dorsal fins of catfish. Male catfish will have longer fins than that of females. Males will also have brighter colored fins.

Look at the openings on the catfish belly. Both will have two openings at the lower belly, one for the anus and the other for the genitals. Male genitals are raised and shaped like a nipple. The female catfish genital area has an opening that is rounded. Right before spawning, the female genital area will be reddish and swollen. 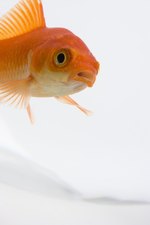 How to Tell the Sex of an Oranda Goldfish

How to Know If a Danio Fish Is Pregnant

How to Tell the Difference Between Male and Female Oscar Fish

How to Tell the Gender of Baby Sulcata Tortoises 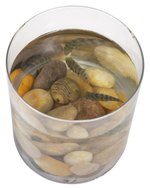 The Difference Between Mosquito Fish & Guppies

How to Keep Koi Fish in an Aquarium