How to Tell If Your Puppy Is a Blue Nose/Red Nose Pitbull?

Owners may find understanding their pit bull breed confusing, and for good reason. Despite its long history, the pit bull breed is highly variable. The term pit bull can refer to the American Kennel Club-recognized American Staffordshire terrier and the United Kennel Club-recognized American Pit Bull Terrier. These two types of dogs are considered by some to be the same breed, despite their subtle differences. The pit bull nose can be any color under the UKC standards. However, the AKC standards favor a black nose, although a different-colored nose is still acceptable. Red and blue are other common nose colors for the pit bull breed.

Command your dog to sit. It is easier to examine your dog's nose while it is sitting still. If you cannot get it to still for long, take a photograph of its face from the front.

Examine the pit bull's nose from the front. You need to see the entire front of the dog's nose to determine its color. 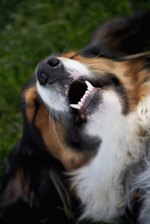 How to Take Care of a Dog's Dry Nose

This Photo Of A Dog Is The New #TheDress

Do They Have American Pit Bull Terriers at the Westminster Dog Show?

How to Treat a Dog's Ingrown Toenail

How to Remove a Pinch Collar

Can Dogs Recognize Their Own Breed?