How to Tell the Differences in Male and Female Cockatoos

Sexual dimorphism means males and females of a species look different -- you can determine visually whether you're looking at a boy or girl. Some species of cockatoo are sexually dimorphic and some aren't; and you'll have to wait a few years until the bird is mature to learn the gender. If you don't want to wait, or a good look can't tell you your cockatoo's gender, DNA testing or surgery can.

The Eyes Have It

Overall, girl and boy cockatoos tend to be quite similar. Some species may have differences in size or head shape, but often the contrasts are so small that determining gender is more of a guess. However, some species can be identified according to gender by eye color. As a cockatoo grows, his eye color changes as he matures -- if he's the right species. In some species, mature male cockatoos have black eyes and females have brownish-colored eyes. This difference between genders holds true for blue-eyed cockatoos, greater sulphur-crested cockatoos, lessor sulphur-crested cockatoos, Moluccan -- or salmon crested -- cockatoos, red-vented cockatoos, rose-breasted cockatoos and umbrella cockatoos. The exception to the rule is the Leadbeater's or Major Mitchell's cockatoo: His eyes will be dark brown, hers will be pinkish-red.

Other physical markers can help identify a cockatoo's gender, depending on the species. The male black cockatoo is easily identified by his black beak, which compared with the female's white or horn-colored beak. The male black cockatoo will be slightly smaller than the female bird, and he'll have brown feathers on his head. The male gang-gang cockatoo has eye-catching red marks on his head, as well as orange, white and red feathers on his lower abdomen. The female is a bit dull in comparison; the orange is not as bright on her chest and red marks are missing from her head. The red-tailed black cockatoo, or Banks cockatoo, has a black beak, grey-tipped chest feathers and a red tail if he's a boy, and a horn-colored beak, yellow-barred feathers on the chest and a reddish-orange tail mixed with yellow if she's a girl. The white-tailed black cockatoo has the same distinguishing characteristics with beak color: black for boys and horn-colored for girls. The ladies of this species tend to be smaller and to have more distinguishing yellow markings. You can tell the difference between male and female yellow-tailed black cockatoos the same way.

A number of cockatoo species can't be visually sexed, including the Ducorps cockatoo, the Goffins cockatoo, the palm cockatoo and the slender-billed cockatoo. The bare-eyed cockatoo -- also known as the little Corella -- can be misidentified, though the female tends to be smaller with shorter feathers around her eyes. If your cockatoo is a species that can't be identified by eye or beak color, or if you can't wait until the bird is sexually mature, you can have a DNA test performed to confirm your bird's gender. A few feathers plucked from your bird's chest will tell the tale at an early age. DNA testing has become a popular method of identifying a cockatoo's gender, as it's less invasive and less risky than surgically determining a bird's sex.

You may be able to figure out your bird's gender by paying attention to behavior, though males and females often have the same behavior patterns. Generally, as a male cockatoo reaches maturity, he'll begin to attempt to mate with people or other objects. Only females can lay eggs, of course, but attempting to hatch an egg doesn't separate cockatoos by sex: Both males and females will engage in egg-incubating behavior.

How to Tell if My Indian Ringneck is Male or Female

How to Determine the Sex of a Senegal Parrot 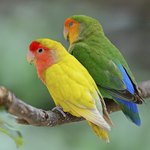 The Difference Between Male & Female Lovebirds 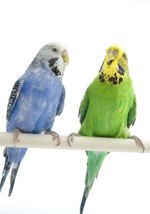 How to Determine The Sex of Your Parakeet

How to Tell If a Parakeet Is Male or Female