How to Tell If a Hermit Crab Is Dead

Whether he's a new addition to your crabitat or an old friend, your hermit crab may have you concerned with his hiding behavior. If your hermit crab has gone down under, he may be molting, dead or just taking a break. You may have to wait several weeks -- or even months -- to confirm he's OK.

A close-up of a hermit crab inside of a shell.
credit: WinterStorm/iStock/Getty Images

Hermit crabs in captivity usually live somewhere between 5 and 15 years. Sometimes a crab has such a stressful life in the pet store he doesn't survive it, or he dies soon after he arrives home in his new crabitat. However, with proper care and some patience, a crab in captivity can lead a comfortable, care-free life for many years. No matter how long you have your crab, you'll go through phases when you don't see him for a while, as he buries himself beneath his crabitat substrate. A hermit crab buries himself for several reasons; he may be molting, injured, seeking some solitude or trying to cool off -- or he may be dead.

It's not unusual for a crab owner to confuse a molting crab with a dead crab. Molting is vital to a hermit crab's survival; his body outgrows his exoskeleton, which he sheds in favor of a roomier version. Crabs molt based on their own needs and schedules, so you can't be sure when your crab is due to molt. A crab will exhibit clues he's about to molt, including cloudy eyes, digging behavior, drinking more water or soaking in his water dish, lethargy and an ashy color to his exoskeleton. Molting is a stressful process for a crab. It can take up to three months for him to resurface and resume his normal activities after he molts. Some of the signs of molting are similar to a dying crab. If your crab is displaying any of the signs, it's best to leave him be or move him to an isolation tank where he can molt without fear of cannibalism from his tank mates while he's most vulnerable.

Hermit crab lovers are used to bringing home a new crab and losing him to the substrate for a while. It's quite common for a pet shop hermit crab to live a stressful existence in a habitat that's not well-suited for these naturally wild creatures. He may be hungry, dehydrated and anxious, resulting in lethargy, digging and drinking a lot of water, the same signs of molting and illness. If he burrows underground, leave him be and give him a couple of weeks to get used to his new home.

Eventually, your hermit crab won't be molting, hiding or cooling off -- he will die at some point. Since this guy sends out some confusing signals, the only thing you can do is to wait it out. If he's dead, he'll emit a strong odor, somewhat fishy-smelling, but that's not a definitive sign that he's dead -- sometimes molting crabs smell bad, too. If he's dead, his body will droop out of its shell, but this is also common in molting crabs. If you come across a "body" in the crabitat, don't assume it's your dead crab because it may be your crab's exoskeleton. If it's his exoskeleton, the eyes will be translucent and hollow, not dark. If there's an abdomen attached, the crab may be dead, or he may be preparing to molt. Move the crab body to an isolation tank in case he is about to molt, so he's not vulnerable to attack. The only definitive way to determine your crab has died is if his abdomen turns black and begins to mold.

Don't be in a rush to declare your crab dead; mistaking a molting crab for a dead crab is common. If he's been underground a while, smooth the surface sand above him and check back to see if he's left any signs of movement, such as tracks, during the night. Crabs are nocturnal and chances are, if he's active at all, it's when you aren't around to see him. If he is molting, provide him a privacy barrier but don't handle him; poking, moving or handling a molting crab can mean lethal stress. Make a note of the date when you last saw your crab and if you don't spot him after three months, assume he's dead and dig him up for disposal. It's better to err on the side of caution and to allow him to emerge on his own.

What Are Rabbits' Sleeping Habits?

How to Know if a Turtle Is Dead 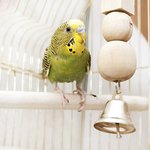 What Are the Symptoms of a Dying Canary?

Can You Own a Pet Kinkajou?