How to Tell the Difference Between a Male & Female Sun Conure

Hailing primarily from South America and Central America, sun conures are magnificently iridescent birds with limited language capability. These birds of colorful plumage -- yellows, oranges and greens -- measure just a foot in length fully grown but have enormous personalities. Sun conures are monomorphic birds, meaning it is essentially impossible to determine their genders by sight. But there are a few methods by which you can sex sun conures.

By appearance only, it is improbable that you'll be able to tell the difference between a male sun conure and a female one. If you're the proud owner of only one sun conure and you suddenly discover an egg in your winged friend's cage, you can be sure your sun conure is a female. If an egg suddenly appears and your cage is occupied by more than one bird, determining which bird laid the egg is obviously more difficult, especially given that both male and female sun conures are inclined to sit on an egg during what would be the incubation period if the egg is fertile. An infertile egg among two birds might mean you have two females, but not necessarily.

According to bird expert Sally Blanchard, one trait of the male sun conure is a territorial approach to his cage and to human companions. The male may be more talkative than a female, and his screeching might be more persistent. Screeching is a common trait with all conures, male and female, which means it's not a terribly accurate determination method.

A veterinarian can surgically sex a sun conure. The vet will anesthetize the bird and pluck away a few feathers, then make a tiny incision in the bird's abdomen. Then the vet will insert an arthroscope into the incision to search for a single ovary or a pair of testes. This method has a higher accuracy rate but carries risks with the administering of anesthesia and the possibility of post-surgical infection.

Your sun conure isn't likely to commit a crime, but his or her DNA is as precise as any utilized in law enforcement. DNA testing is as accurate as surgical sexing but poses less of a risk. Your bird groomer or an avian vet can extract a small amount of blood by clipping a toenail slightly shorter than normal and squeezing the toe. The blood sample is then submitted to a lab that will determine your pet's gender.

When It Just Doesn't Matter

Unless you're planning to breed your sun conures, the sex of your bird might not be of great concern. You might be content to sit back in patient wonderment to see if Randy lays an egg and becomes your Sandy.

How to Tell Between Male & Female Doves

How to Tell Male From Female Lorikeets 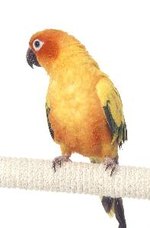 How to Make a Sun Conure Nestbox

How to Tell the Differences in Male and Female Cockatoos

How to Know If Your Gourami Fish Is Pregnant?