How to Prevent and Treat Dog Calluses

In humans, calluses mostly develop on feet and hands or anywhere where there's repeated friction against the skin. Dogs, on the other paw, mostly develop calluses on their elbows and hips. If you allow Rover to snooze on the couch or bed, chances are the softer surfaces will protect him from developing calluses; however, calluses may eventually show up even if he occasionally rests on hard surfaces, and in some cases, they may even lead to troubling complications.

If you think that calluses are a bad thing, think again. The fact is, those calluses are actually quite normal and even have a protective function. If you look at your dog's calluses, you will notice that they consist of thickened skin found over prominent bony areas that poke out, such as the elbows, hips and hocks. Their main function is therefore to protect the bone.

Some Calluses Are Severe

While you don't need to rush your dog to the vet when you notice calluses, in severe cases, these areas of hardened skin may at times develop into ugly ulcers or oozing sores. An infection may occur; in some cases, a fluid-filled area at the point of one or both elbows may form, a condition known as elbow hygroma. As the old saying goes: "an ounce of prevention is worth a pound of cure" when it comes to calluses in dogs.

Give Him Something Soft to Rest On

Prevention of dog calluses requires going to the root of the problem. The primary step therefore entails managing the dog's environment. If your dog seeks out hard, cool surfaces to escape from the summer heat, try providing alternate sleeping areas. For instance, offer him a cooling bed in the summer and entice him to use it; in the cooler months, provide him a comfy, soft surface to sleep on; place treats or toys on it to make it extra rewarding.

Once your dog has softer sleeping quarters, calluses tend to resolve on their own. The application of vitamin E may help soften them. Fluid-filled hygromas may take two to three weeks to resolve and may require the use of special pads or bandages for the elbow, says veterinarian Wendy C. Brooks on VeterinaryPartner.com. In the cases of an infected hygroma, antibiotics may be needed; severe cases may require drainage and surgical intervention. Once healed, the callus is preserved to provide an extra layer of protection to the area.

Observing your dog's elbows, hips and hocks can help you keep track of any impending problems. Make it a habit to routinely inspect your dog's bony areas for the presence of calluses. When you first notice a callus, intervention immediately to prevent it from developing into an ugly ulcer or an oozing abscess. Treatment is fairly easy and effective when a callus is discovered early. Treatment becomes trickier when the callus isn't routinely monitored. Should at any time your dog appear to be in pain when he lies down, stands up or walks around, play it safe and make an appointment with your veterinarian.

Symptoms of Pulled Muscles in Dogs

Skin Disorders on a Dog's Elbow 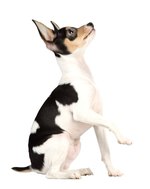 A Bruise on a Dog's Paw