What Type of Antifungal Cream Can Be Used to Treat Dog Yeast Ear Infection?

Yeast infections are caused by a number of things, according to Pet Education.com. The dog's skin, even the skin in the ears, has an immune system boosted by the T lymphocyte cell that must remain strong to prevent yeast overgrowth and infection. Underlying conditions that weaken the skin's immune system give the yeast the power it needs to take over. Such conditions include pre-existing hereditary or infectious disease, allergies, bacterial infections and seborrhea (excessively flaky skin).

Yeast infections tend to be more problematic in highly humid, warm weather, so the summer can be a real nightmare for a dog susceptible to such infections. No matter where the infection is located, itchy skin is a clear indicator there's something wrong.

If a dog is suffering from a yeast infection in its ear, it will scratch it incessantly, traumatizing the skin. A foul smell and/or discharge coming out of the ear, frequent head shaking and thick skin that is red or black are also signs of a yeast infection in the ear.

The antifungal cream is applied directly on the area of ear's skin where the yeast infection is present as many times per day as recommended by the veterinarian.

To increase miconazole's effectiveness, Doctors Foster and Smith Pet Pharmacy recommends clipping the dog's fur from areas in the ear where the yeast infection is being treated. Keep this area fur-free while using the antifungal cream. In some cases, this may be as long as six weeks.

Remaining consistent in keeping the dog's fur clipped and applying the antifungal cream at the same time every day ensures optimal benefit.

Miconazole may cause redness or a rash at the application site. If this occurs, discontinue its use immediately, advises Doctors Foster and Smith.

Another concern is an allergic reaction, which may cause the dog's face to swell or break out in hives, vomiting or diarrhea. In severe cases, the dog may go into shock, suffer from seizures or slip into a coma.

Neosporin as a Treatment for a Rash in a Dog 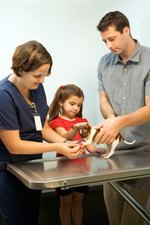 Uses for Drawing Salve on Dogs 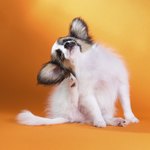 How Dogs React to Witch Hazel