What Types of Technology Do Veterinarians Use?

Whether your beloved pet is undergoing treatment, surgery, a diagnostic process or a dental procedure, technology plays an essential role in modern veterinary medicine. Much of the same advanced equipment that is available for use in the human medical field is also utilized in the animal health care industry.

While your pet is under anesthesia, his vital signs must be closely observed and recorded by a dedicated anesthetist in order to monitor his anesthetic plane. This is essential in maintaining the individual patient's ideal parameters for keeping him just within the pain-free zone without his vital signs dropping dangerously low. Vital sign monitoring is accomplished with the help of machines. These devices have leads and probes that are affixed to various parts of the patient's body. These leads and the information that they register include:

Cutting lasers are being wielded more frequently in veterinary operating suites. Laser surgery offers advantages over traditional scalpel surgery. Some of these benefits include:

Due to the ability to adjust the wavelength frequency of the laser, a variety of surgical procedures may be performed with a laser, from simple wart removals to feline declaw procedures to canine neuters.

On the flip side, low level lasers are being used as therapeutic devices. Through biostimulation, low level laser therapy, also known as cold laser therapy, promotes healing at the cellular level. This therapy is utilized primarily for pain relief and to stimulate healing of minor joint, spinal and soft tissue trauma.

Many animal hospitals are able to run complete blood counts and chemistry profiles on their patients on the premises, thanks to in-house blood analyzers that can process these tests and integrate the results into the patient charts. This can make the difference in achieving a faster diagnosis than the alternate method of sending blood samples out to commercial laboratories. Results from an in-house analysis are ready in 10 minutes, whereas results from an outside laboratory are not available for at least 24 hours. For a sick patient, the quicker turnaround time for results means sooner administration of the care that the patient requires. Another advantage of the in-house blood analyzer is the ability to perform preanesthetic screenings on the morning of a surgical or dental procedure.

Taking radiographs, or X-rays, is one of the first steps in the diagnostic testing process. Radiographs can reveal bone fractures and deformities, masses, intestinal blockages, pneumonia and certain foreign bodies. Radiographs, which are images produced by electromagnetic radiation, were once developed manually in a series of chemical-filled tanks. These tanks have been replaced in many hospitals by automatic processors, which produce the developed films more quickly and with fewer artifacts on the films. Many hospitals now have digital X-ray machines that display the images on a computer screen, and these images are integrated with the patient's medical history. Software technology that digital radiographs offer can produce images that are much more detailed than traditional X-rays.

If your canine companion is scheduled for a dental procedure, expect dental radiographs to be taken of his pearly whites. Digital dental X-ray units provide veterinarians with images of what is happening underneath your dog's gum line, allowing assessment of tooth root health and immediate treatment if necessary.

If your puppy has been scratching his ears incessantly, or if your dog suffers from persistent ear infections, your veterinarian may have a valuable tool at his or her disposal to peer all the way down your furry friend's ear canals. Digital otoscopes are designed to slip into the ear and magnify the entire passage, revealing crawling ear mites and providing a clear picture of your pet's ear drum. These images are shown on a monitor screen. If your dog's ears are perpetually filling with an accumulation of debris, he may benefit from an ear flush. The digital otoscope attachment can be attached to a device that flushes your dog's ear canals, and the otoscope allows the veterinarian to confirm that the canals are sufficiently cleaned out during this procedure.

When blood panels and radiographs do not provide the diagnostic answers to your dog's symptoms, your veterinarian may recommend more advanced diagnostic imaging procedures. One of the most commonly performed diagnostic imaging tests is the ultrasound, which is also known as a sonogram. Ultrasonography can provide details about the structural health of vital abdominal organs that an X-ray cannot. Ultrasound technology also enables a thorough examination of the heart's health and function by producing an echocardiogram. Ultrasound images are produced by high-frequency sound waves.

Some additional advanced diagnostic imaging tests that are utilized in veterinary medicine include:

Next time your furry family member needs to visit the veterinarian, you can take comfort in knowing that a host of technology is available to ensure the most advanced diagnostic and treatment process.

How to Program an Innotek Remote 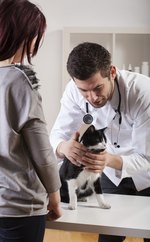 How to Check a Cat's Blood Pressure