The Use of Ofloxacin in Pets

Some of the world's nastiest pathogens aren't picky about the bodies they invade. To these germs, the flesh of mammals, birds and reptiles may all seem equally inviting. That's why ofloxacin, a drug originally developed to treat bacterial infections in people, does the same for many of the animals we live with and love. Ofloxacin and all its derivatives are available only by prescription from a veterinarian.

About Ofloxacin and its Derivatives

Ofloxacin, a broad-spectrum antibiotic classified as a quinolone, is used by veterinarians to treat bacterial infections. The drug works by neutralizing a specific enzyme inside bacteria, thereby rendering them incapable of reproducing or repairing themselves. Over the years, these quinolones have been refined into many derivative drugs, all with slightly different molecular structures, geared to specific animals or conditions. The most recent versions, modified to contain fluorine atoms, are called fluoroquinolones. The generic names of veterinary quinalones often end with "-floxacin." For instance, enrofloxacin, marbofloxacin, difloxacin and orbifloxacin are all used to treat cats and dogs.

When cats fight each other or dogs, injuries to the cornea, accompanied by bacterial infections, are a common consequence for both species. Severe injuries may require surgery but to clear up infections, vets often treat animals' eyes with ofloxacin ophthalmic drops or ointment. Infectious conjunctivitis caused by such organisms as staphylococcus, mycoplasma, chlamydia, pseudomonas and other bacteria also respond well to ofloxacin. In cats, conjunctivitis caused by the feline herpesvirus can become chronic, especially in households with more than one cat. One dangerous side effect: in cats, ofloxacin can lead to degeneration of the retina. The drug is also used to treat eye infections in other mammals, birds and reptiles.

When harmful bacteria invade animals' bodies, vets often treat the infections with ofloxacin drugs administered orally or by injection. Tularemia, caused by the F. tularensis bacterium, crops up all over the U.S., rabbits being the main vector of transmission -- hence the popular name "rabbit fever." Cats and dogs can also transmit this potentially deadly disease to humans. Typically, cats display more severe symptoms, and are at greater risk of dying from the disease than dogs, but tularemia in both species is commonly treated with fluoroquinones. Positive results have also been reported when canine brucellosis, which affects the reproductive systems of dogs of both sexes and causes pregnant females to lose their puppies, is treated with this class of antibiotics. Fluoroquinones are also prescribed for skin and soft tissue infections, mastitis, prostatitis, peritonitis and osteomyelitis in dogs and cats.

The Yersinia pestis bacterium responsible for bubonic plague, which killed more than half the population in Europe in the 14th century, is alive and well in the U.S., primarily in Oregon, Arizona, Colorado, California and New Mexico. According to The Merck Veterinary Manual, even though an average of only about 10 human cases a year turn up, when dogs and cats are bitten by infected rat and rodent fleas, they can carry the fleas home to infect their human family members. Bubonic plague first targets the lymphatic system; when it progresses from there to other organ systems, it's called septicemic plague, and can be spread through contact with bodily secretions; and when it invades the lungs, it's known as pneumonic plague, which can spread through the air. Even though fluoroquinones have never been studied in clinical trials of plague-infected cats and dogs, the drugs have proven effective in treating pets in regions where the disease is endemic in wildlife, The Merck Veterinary Manual reports. 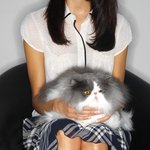 How to Cure Cat Nasal Congestion

Where Do Cats Come From?

How to Treat Tapeworm in Cats