16 Cats Who Have Lost Their Damn Minds

No matter the emotion or reason, our feline friends will occasionally express themselves in unexpected and mysterious ways.

Case in point: The hilarious GIFs embedded below capture cats losing their minds, their shit, and their cool.

1. This one Slinkying down a flight of stairs as it changes states from a solid kitty to a liquid kitty.

2. This duo that heard their human open a can of tuna in the kitchen.

3. This one that can’t believe she actually agreed to pay Uber’s surge pricing.

4. This one that was having a good time at the party until someone started streaming “Who Let The Dogs Out”.

5. This one that’s spooked by the prospect of having more greens added to his diet. Scary AF, amirite?

6. This one whose mind was blown—SHOCKED, I TELL YA—when he learned that koalas aren’t technically classified as bears.

7. This one that’s living proof of Albert Felinestein’s oft-quoted observation that "insanity [is] doing the same thing over and over again and expecting different results."

8. This one struggling to master the dab.

9. This one that made a terrible life decision and instantly regretted it.

10. This one BFFing with a vacuum cleaner.

11. This one that agrees 100 percent with Chief Brody’s assessment in Jaws that we’re “gonna need a bigger boat.”

12. This one that proves even big cats can be scaredy cats.

14. This one that has no idea what manner of sorcery this is.

15. This one who literally couldn’t deal when his Mom started following him on Snapchat.

16. And, finally, this one that is super stoked to rage with the squad over the weekend.

Turns Out Your Cat Is Way More Independent Than You Thought 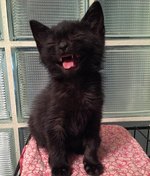 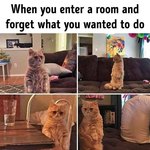