Do Male Dogs Sense If a Female is Spayed?

Well, it depends on what you mean when you ask that question! If your neighbor's intact male dog has a habit of regularly going after your female pooch for mating, you can curb Rover's advances by getting your female spayed so she no longer goes into heat. Spaying females generally reduces hormone-influenced actions of males greatly. In other words, Rover won't know that she's not a viable reproductive partner, she'll just no longer give off that irresistible scent and he won't be as attracted to her. However, there are a few reasons why a male dog may still make advances towards a spayed female. Read on to see what they might be.

Rover may be smart, but he won't actually know that you took Lucie to the veterinary hospital across town for her spaying surgery. He just won't smell the odor that she would give off when she's in her heat cycle each six months or so, because the cycles will cease completely. Spayed females cease going into heat permanently, and therefore no longer radiate that scent that draws hormonal male dogs in from the other side of the neighborhood. Fixed female dogs, in short, no longer attract males.

Not only does spaying stop overzealous male dogs from smelling your pet's mating readiness, it also generally ends other typical aspects of estrus, including bloody discharge, frequent urination and unusually anxious, fidgety behavioral patterns. If a male dog doesn't seem to sense that a female dog is spayed, it could be because she's actually going through a heat cycle, symptoms and all. Spayed dogs sometimes exhibit heat signs when ovarian tissue remains in their bodies through error. If you're worried that this might be the case with your pet, take her to the veterinarian immediately. The condition is referred to as "ovarian remnant syndrome."

And If Rover Keeps on Roving?

Male pooches, for the most part, are attracted exclusively to the unmistakable smell of the female dog's heat cycle. If a male dog still behaves in a hormonal way around your spayed female, it could indicate a lot of different things. He could be attracted to a nearby female dog that actually is in heat, for example. Note, too, that seemingly hormonal and sexual displays are sometimes misleading. If your male dog tries to mount your spayed female, it could mean that he's attempting to declare his dominance over her, rather than trying to mate.

About the Author
Naomi Millburn has been a freelance writer since 2011. Her areas of writing expertise include arts and crafts, literature, linguistics, traveling, fashion and European and East Asian cultures. She holds a Bachelor of Arts in American literature from Aoyama Gakuin University in Tokyo. 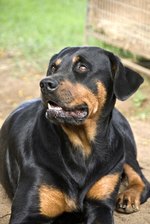 Does Neutering Change A Dog's Behavior?

How Old Does a Male Dog Have to Be to Breed?

How to Deal With a Dog's Discharge When She's in Season

How to Stop a Cat in Heat From Peeing Everywhere