Is it Ok To Put Pee Pads in a Dog's Crate?

If you're putting a pee pad in your dog's crate, you could be doing serious damage in the house-training department. Leaving a pad in the crate teaches your pooch all the wrong behaviors about going indoors and what his crate is for, so use the crate and the pad independently of each other.

When you put a dog in a crate, his instincts tell him not to go to the bathroom. You wouldn't want to curl up and take a nap next to a puddle of waste, and neither does your little buddy. Crate training, then, is an effective method of housebreaking a dog and of keeping him from wrecking shop while you're out of the house. If you throw down a pad in there, though, he won't learn to hold it in when he has to go to the bathroom -- and that doesn't bode well for his behavior once you let him out of the crate.

Dogs can only hold it in for so long, and if you don't let him out before he bursts, he's going to have an accident, pad or no pad. If you're leaving your dog in the crate for so long that he has to eliminate while he's in there, though, the solution isn't a pee pad -- it's taking your dog out. While dogs of different sizes can be crated for different amounts of time, your dog should never be forced to stay in a crate for so long that he can't hold in his waste. If you can't let him out because of obligations like work, you should arrange for someone else to take him out, to take a break during the day or to let him roam the house without being crated. Leaving him in for too long is considered inhumane.

Of course, your dog can use pee pads all he wants when he's out of the crate. If you train your dog to use a pad, for example, you may be able to let him roam free when you aren't home, and you can save him the discomfort of going out in extreme weather conditions. Lay down a pad and plop your dog on it periodically, especially if he's sniffing around for a good place to eliminate. Instinct guides him most of the way, but if he needs more direction, blot up his next accident with the pad and leave it on the floor. His own scent will compel him back, and you can praise him every time he eliminates on the pad.

Ideally, your dog's crate shouldn't even be big enough to accommodate both him and a pee pad. His crate should be just big enough to stand up and turn around in. Don't feel bad -- the confined space is comforting to a dog, whose instincts tell him to nest and get cozy. When you use an appropriately-sized crate, you prevent him from picking up the bad habit of eliminating at one end and snoozing at the other.

About the Author
Tom Ryan is a freelance writer, editor and English tutor. He graduated from the University of Pittsburgh with a degree in English writing, and has also worked as an arts and entertainment reporter with "The Pitt News" and a public relations and advertising copywriter with the Carnegie Library of Pittsburgh.

Signs That a Dog Has to Go Potty

How to Stop a Dog From Peeing & Pooping on the Bed

How to Stop a Dog from Peeing in a Crate

Why Won't My Puppy Poop Outside?

How to Keep a Dog Contained in a Room 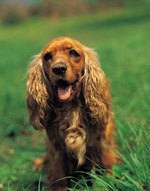 Home Remedy for a Dog Peeing Inside