Meet Lynea Lattanzio of Cat House on the Kings

When cat lover Lynea Lattanzio purchased a 4200 square-foot house on a 6-acre plot of land in Fresno, CA, she had no idea what the future had in store for both her and her new abode. Little did she know that this home (which, she admitted, was too large for one person) would lead her to her life's ultimate purpose—founding the largest no-cage, no-kill cat rescue sanctuary of its kind in the world! Now a sprawling 12-acre facility, the Cat House on the Kings provides for the needs of over 1000 felines (between 700 - 800 live on site at any given moment) in California's Central Valley, an area known for having the highest kill rate of homeless animals in the entire state. The animals (she rescues dogs as well) roam freely about within the fenced property, and are guaranteed a lifetime of shelter and care either at the Cat House or with adopted families.

Lynea's successful efforts have been recognized by media outlets far and wide, including the National Geographic Channel which produced a 2011 television documentary about her entitled The Lady with 700 Cats. narrated by actress and animal-welfare activist Jane Lynch. This has provided some well-needed publicity for the non-profit organization that relies entirely on donations from the public—but the need to spread the word about the Cat House on the Kings remains constant.

Besides spaying/neutering and housing their rescues, Lynea's full-time staff and volunteers provide a number of services to the community, including: offering advice and education to the public regarding pet care and successful rehoming; pet adoption services; lifetime care for surrendered pets; and working with local vets to provide low-cost spaying and neutering.

Cuteness had the privilege of chatting with Lynea about the amazing work being done at the sanctuary (and what people can do to help) as well as her belief that compassion for animals is a requirement for a "civilized" society.

Had you always owned cats prior to turning your home into a cat sanctuary, or did your deep love for cats develop later on in life?

When I was young all I wanted was a kitten and my mom wouldn't let me have one. When I was married I had 2 cats. After I got divorced I had 4 cats. I have always loved cats. Maybe not being able to have any in my childhood attributed to my "obsession!" The reason I started this rescue is because I found a need to help and the heart to do it.

The Cat House on the Kings appears destined to be—as you'd purchased your home home prior to knowing that Fresno County, more than any other, was in dire need of a cat sanctuary. Do you feel that this has always been your calling? Can you imagine what your life would be like had you not founded the Cat House?

When I purchased the first 6 acres I really did not have a life's goal. After I purchased this property I wondered what I was thinking as the 6 acres came w/ a 4,200 sf house. Now I had to take care of all of this property. Nine years later I began the rescue. After many years I realized this was a possible "pre-destined" reason/purpose to this purchase that I was just not aware of at the time. Now we have 12 acres. Divine intervention? Maybe.

How did you go about raising the funds to expand the sanctuary from 6 to 12 acres, and was this beyond your expectations at the time?

We knew the neighboring property was going into foreclosure. At about the same time we received a letter notifying us that an unknown benefactor in Redondo Beach left us a condo and a car plus some art work. Talk about Divine Intervention! With this money we purchased the additional property as the other bidders were not cat people. We also cat fenced the entire 12 acres!

How many cats are you caring for at the moment? Can you give us a rough idea of how many strays and surrenders you welcome into the sanctuary in a given period of time?

We currently have about 800 cats and 300 kittens on site w/ another 150 in foster care. We receive animals daily. Most are off the streets, some are from exchanges w/ other groups. For every cat an approved non profit 501(c)(3) no kill brings us they must take 5 adults or 25 kittens in exchange (or pay us half of our fees). For the 2,000 a year we take off the streets we receive no monetary recompense. We absorb all costs for these animals.

How many staffers and volunteers does it take to run the sanctuary and adoption center?

We have 40 employees. We have housekeeping, maintenance, vet techs, office, and adoption teams. We have volunteers that help at fundraisers, the adoption facility in Petco Fresno, and out here to pet and socialize or photograph the cats.

Finally, what's the single most important message you'd like to convey to our readers regarding making the world a happier place for our feline friends?

When it comes to the way the USA treats domestic pets, we are a third world country. When we here in America feel it is OK to breed and then abandon and finally kill our domestic companions, something needs to change. Civilized people do not do this.

6 Ways To Help Homeless Cats When You Can't Adopt One

These Cat-Loving Rescuers Climb Into Trees To Save Stuck Kitties 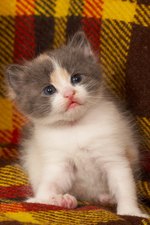 How to find free kittens

Hawaiian Sanctuary Is Heaven On Earth For Cat Lovers