Pomeranians are effervescent little dogs with big personalities. Originally bred to be a whopping 30-pounder who herds sheep, they are nowhere near that now and they no longer herd sheep instead serve as companions. In 2012, they came in at No. 19 on the American Kennel Club's dog registry making them among the top 20 most popular dogs in America. They are competitive, pompous and sassy little fellas.

All dogs are individuals, just like people. Though humans share many traits, each one has his own essence and it's the same for dogs. The same genes that cause all dogs of a certain breed to look alike also dictate their temperaments. So when you look at the personality of the Pom, you will note that your Pom and that of your neighbors both may really love to chase balls, but the similarity in their personalities may end there. It's important to note that when you are talking about the personality traits of any breed, you are talking in generic terms and individual dogs within that breed will have their own particularities, likes and dislikes and responses to stimuli. DNA only goes so far to determine personality; upbringing and experiences also are heavily instrumental to forming a dog's personality.

The American Kennel Club is the registry for purebred dogs in the United States. It keeps track of purebred dogs and breeders. The AKC sanctions competitions among breeds to find the dogs most closely matching the description of a perfect purebred. According to the AKC breed standard for temperament, the Pomeranian is extroverted, highly intelligent and has a "vivacious spirit, making him a great companion dog as well as a competitive show dog."

Ask any Pomeranian aficionado about their chosen breed and they'll tell you that what the AKC has to say about the breed's temperament doesn't begin to address just how remarkable these little dogs are. They are the quintessential "one-person dog," loyal to their owner and eager to please, making them easy to train. They catch on quickly to new skills and remain alert and curious when with their owners. They are not known to be "Velcro dogs," that is, dogs who follow their owners around all day. The Pomeranian is an excellent watchdog.

Every ying has its yang and so it is with Pomeranians. They do have some faults. If not taught at an early age that their human is the leader, the Pom will demand to be the the big Kahuna in the relationship. They are dominant and intelligent, which is not always a good combination. Other personality problems are induced by the human spoiling them and allowing them to think they are in charge. They can be feisty and prone to attack other dogs, even larger ones, and may succumb to panic attacks when frightened. Separation anxiety is often seen in Poms. They are one of the few breeds of dog that is not recommended for families with small children; however, may be a good choice for an elderly person.

By Michelle A. Rivera

About the Author
Michelle A. Rivera is the author of many books and articles. She attended the University of Missouri Animal Cruelty School and is certified with the Florida Animal Control Association. She is the executive director of her own nonprofit, Animals 101, Inc. Rivera is an animal-assisted therapist, humane educator, former shelter manager, rescue volunteer coordinator, dog trainer and veterinary technician.

How Big Do Maltese Yorkies Get? 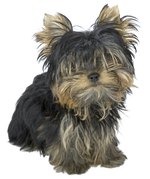