Should You Cover Your Dog's Crate?

Crate training your dog — it's a polarizing topics that has many pet owners divided. Some feel that training your dog to go to or stay inside of a crate while you're asleep or away from the house is cruel, but when crate training is done correctly it can help your dog build a habit that may actually end up keeping her from needing a crate in the long run. Some people use hard covered crates that provide little sight of the room around them, while others who use wire crates cover theirs with a sheet or light blanket. If you're wondering if covering your dog's crate is right for you, that will depend on your home environment, your dog, and what it is you're using the crate for.

What is crate training?

Crate training is a teaching method that helps a dog associate one specific spot as their area, which they can go to for comfort or if they are feeling overwhelmed by action in the rest of the house. According to The Humane Society of the United States, one common reason people crate train their dogs is to help with housebreaking, as most dogs will not soil the area they sleep in. Crate training can also alleviate behaviors ranging from destructive tendencies to anxiety, adds Merck Veterinary Manual, and in many cases, dogs who associate their crates with comfort will seek out these safe havens on their own over time. Of course, this method should be used to encourage new and desired behaviors and putting your dog in his crate should never be done as a punishment, which can lead to more stress.

Sometimes, however, a crate can feel frustrating for dogs, especially young puppies, if they can see what's going on in the room around them. If you keep your dog's crate in a high-traffic area, like in the living room, you should move the crate to a more quiet location that still feels comfortable, like a corner of your bedroom. If your dog is still acting out by barking or chewing on his crate, it may be in your best interest to cover it with a piece of fabric.

Why cover a crate?

If you think that your dog could benefit from a covered crate but aren't entirely sure, there are a few things to consider which may help you make the right decision. The idea behind allocating a specific spot for your dog to retire to at certain times is essentially to mimic the setting of a den, which is small, safe space wild dogs create for themselves. Often, people will fashion their dog's crate with some soft bedding, a favorite toy or two, and access to food and water, which is especially important if you're leaving your dog in a crate while at work, says Preventative Vet. Some people will cover the crate entirely to help make even more of a den-like atmosphere, which also limits the dog from distractions that could excite him, like a cat walking by, a child playing, or even two people talking in the same room.

Knowing that stimulating things are going on nearby, yet out of their reach, can be very frustrating for some dogs and may cause them to bark. Pet Crates Direct notes that being physically limited by the confines of a crate while people or other animals are in the room can induce fear-based anxiety, which may eventually lead them to resist going back in the crate later on. To put it simply, draping a blanket over a dog crate can provide some dogs with an additional measure of security and serenity, making their den cozy and complete. Think of it like closing the bathroom door just before you step into a relaxing hot bath — peace, privacy, and security go a long way for dogs too.

How to cover a crate

Covering your dog's crate is easy and can be done inexpensively with an old sheet, towel, or lightweight blanket you have at home. The main thing to keep in mind when choosing the right cover is breathability, so skip anything heavy or super-insulated that may restrict air flow inside the crate. A basic cotton sheet is a great option for most dogs and shouldn't make breathing uncomfortable, assuming your dog doesn't have existing respiratory issues. Pet Crates Direct went on to add that many popular store-bought pet crate covers come in warm tones, like brown, gray, or white, which may add to the den-like atmosphere you're looking to create for your canine companion, and may be something to keep in mind when choosing a material to use.

If you're still worried that your dog won't get great circulation in the crate you can easily adjust the coverage of her crate to best meet her specific needs. One way to do this is by positioning her crate in a corner of the room and covering only the sides of the crate that are exposed to the rest of the room (read: not the two sides that are adjacent to the walls.) Pet crate covers can also be bought to slide over your existing crate if you're looking for a more aesthetically-pleasing option and some crates already come with covers attached, like plastic crates, which are often used for transporting pets. Finally, always be sure to keep your dog's crate out of any areas that will be exposed to direct sunlight for long amounts of time and be sure to position crates away from any items that could be pulled into the crate through the crate's bars, like houseplant leaves, loose laundry, or electronic cords and wires.

When to skip covers

Often, covering a dog's crate can alleviate anxiety and allow them to calm down — in turn, giving you and your family a break from excessive barking or scratching from inside of his den. For some dogs, though, covering a crate can lead to more problems and may not be a simple solution. One way covering a dog's crate can be harmful is if your dog pulls the blanket from over the top of the crate into the inside of his crate through the metal wires, which can not only result in a shredded blanket but may also present a choking hazard. Another sign that crate covers aren't for your dog is if you see him exhibiting fear or aggressive behaviors when you coax him into his crate, or if he starts barking excessively once the cover goes on.

Like crate training, crate covers only work if your dog learns to associate the cover with comfort and tranquility, so if she's associating it with anxiety you'll need to try something new. Acclimating your dog to her crate cover can be done with positive reward training, like feeding her a treat or showering her with praise when she goes in her crate. Karen Pryor Academy suggests building up the amount of time your dog stays in her crate slowly and always offering a reward for a job well done, which you can also try to get her to associate only good things with a crate cover. If the cover still seems to be a major source of stress for your dog, it is recommended that you seek the services of a professional trainer or animal behaviorist, who may be able to spot an underlying issue that could be leading to your dog's fear of a covered crate or confined space.

Should You Cover a Dog Crate? 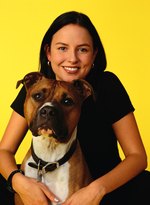 What Is a Good Cage Size for a Pit Bull?

Stop a Dog From Peeing in Their Doghouse

How to Keep Two Dogs Separate

Do I Have to Crate Train My Dog?