Why Is My Chihuahua Aggressive?

Many people worry about the aggressiveness of large dogs like pit bulls and German shepherds. This is an assumption based on the fact that big dogs are more muscular and overpowering than small dogs. However, even the most diminutive dog, including a Chihuahua — the smallest recognized dog breed — can be aggressive. "Small dog syndrome" is a collection of behaviours often displayed by small dogs that includes lunging or snapping at perceived threats, growling at other dogs and people, and other combative behaviors that make life difficult.

Chihuahuas can be aggressive.
credit: thisislover/iStock/GettyImages

But take heart, you can take steps to improve your Chihuahua's aggressive tendencies.

"Small dog syndrome" is a term that describes a variety of behaviors that many, but not all, small dogs exhibit, says Purina. The behaviors associated with small dog syndrome are considered defensive behaviors. Small dogs such as a Chihuahua or Chiweenie may act extra-aggressive because of their small stature, just and trying to protect themselves.

Typical behaviors displayed by small dogs can include a general excitability and a persistent jumping up on owners, visitors, and even other dogs. They may growl excessively at other people or dogs. They may lunge or snap their jaws, even when there is nothing for them to be defensive about. They may also have a noticeable fear of other dogs.

Even though small dog syndrome is associated with aggressiveness, it may also occur in conjunction with fear-based behaviors such as hiding, wanting to be picked up, held, or carried. Your small dog may not obey commands such as being told to move off of furniture. Showing aggression toward other dogs, in particular larger dogs, is often a sign that they are fearful. It is all a psychological "ploy," so to speak, by the much smaller dog to make themselves come across as bigger and more aggressive than they actually are.

Cesar's Way dog training blog talks about dog breeds and aggression and corrects the common misunderstanding that only large breeds or dogs such as pit bulls are aggressive. Any dog breed can display aggressive behavior, but the main difference is that an aggressive and large dog such as a pit bull can inflict more damage.

The Atlantic reported research by Dognition that sampled data from people who responded to questions about their dog's aggressiveness. More than 4,000 dog owners responded. Incredibly, in almost every case, out of the 35 most common breeds, Chihuahuas were reported as the most aggressive, especially toward bigger dogs they have not seen before. The pit bull, often portrayed in the media as being an aggressive dog, was consistently ranked as one of the least aggressive dogs.

When considering Chihuahua aggression and Chihuahua temperament, part of any dog's temperament comes down to how they were raised, explains Canna-Pet. This is not to say that all aggressive Chihuahuas were improperly raised, but many instances of aggression boil down to lack of socialization. All dogs need to be socialized to be around people and other dogs.

If dogs are not totally comfortable around people and other dogs, this can be one factor that leads to aggression.

Chihuahuas are enthusiastic little dogs with tons of energy. If they are bored or not getting enough exercise to burn off all that energy, they can lash out with aggression.

A Chiweenie is another small dog that displays small dog syndrome. Dog Breed Info explains, a Chiweenie is a cross between a Chihuahua and a dachshund, thus one of the smallest dog breeds. According to Encyclopedia Brittanica, the Chihuahua dog breed originated from the Techichi dog, a small dog kept by the Toltec people of Mexico. Occasionally, people spell Chihuahua as it sounds, "chi-wa-wa," but it's simply a misspelled name for the Chihuahua.

Tail and Fur lists the following small dog breeds that show aggressiveness, in addition to the Chihuahua:

Believe it or not, Cesar's Way suggests that one cause of dog aggression is a lack of adequate exercise. If you are worried about your Chihuahua's aggressiveness, review your exercise routine. Even a small dog needs adequate exercise and mental stimulation. Cesar's Way explains that exercise burns off extra energy and helps maintain a healthy and balanced state of mind.

Also ensure other family members are responding consistently to your dog's behavior, as well. Play with your dog regularly with toys that exercise both her mind and body to keep an overabundance of energy in check. Purina recommends encouraging play sessions with gentle, safe dogs of a similar size. A tired dog is usually a well-behaved dog.

If the training is not an easy thing for you to do, work with a professional obedience trainer or canine behavior specialist. Work on having your dog obey basic commands, and then focus on specific behaviors, such as not barking or not jumping. Treats and praise are typical ways to reinforce positive behavior.

Canna-Pet says that early socialization may be the key to avoiding aggressiveness and small dog syndrome. If you bring your dog home as a puppy, introduce her to new environments, new people, and new dogs early and often. The more your dog encounters new experiences in a safe and comforting way as a puppy, the more likely he will be to accept new environments as an adult dog.

Owners of small dog breeds such as Chihuahuas often keep them in small environments, such as a small apartment or a home with a small yard, precisely because they are so small. But Purina says that without proper stimulation and exercise they can become yappy, which is one of the problems that many owners of small dog breeds complain about. If you have a young dog, take him to obedience classes early on so he can become properly trained and socialized. If you get your dog as an adult, work on basic training and socialization as if he were a young dog and you were starting over.

Chihuahuas are smart and can learn and adapt quickly, but consistency in reinforcing positive behavior is key.

How to Discipline Chihuahua Puppies

The Best Dog Foods for Chihuahuas 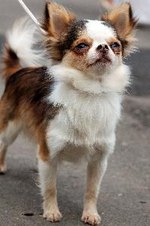 How to Potty-Train a Chihuahua

How to Train a Chihuahua Terrier

How to Potty Train Morkie Puppies