It's the "Sophie's Choice" of pet ownership, an either-or dilemma we've all wrestled with: Sacrifice your dinner for a cute AF photo or shoo away an impatient feline with zero respect for personal boundaries.

Such was the extremely relatable Catch-22 a Rhode Island woman found herself in earlier this month. Writing on — where else? — Twitter, Margaret Middleton shared an amazing, Pulitzer-caliber portrait of her partner's cat, lovingly nicknamed the Banshee, creeping on a plate of freshly cooked noodles.

"Save your girlfriend's pasta or get the shot of a lifetime?" the museum exhibit designer asked her nearly 5,000 followers of an image taken at, well, exactly the right moment, the ravenous calico's eyes communicating a state of ecstatic frenzy.

Not surprisingly, the kitten's exaggerated facial expresh elicited a very strong reaction on the microblogging platform, where people were quick to pile on with quotes, memes and takes.

"You’re telling me you have the guts to stop this," questioned one man in rhetorical fashion.

"One could share," advised this woman, before invoking an iconic moment from Disney's "Lady And The Tramp" (you know the one).

"I see no dilemma," quipped a second.

I see no dilemma https://t.co/LiiCHQpHsV

Naturally, some opted to defend the Banshee, because pragmatism.

Shot of a lifetime, obviously, you can always make and/or order more pasta, but much cat magic is never repeated https://t.co/ARCK9xSAfY

So moved by the spectacle were some folks that they even drafted LOL-cat styled memes using the original image.

As the original tweet viraled out, commenters chimed in with images of their own critters encroaching on all the human foods.

"Where there be food there be kitties. Case in point:"

Where there be food there be kitties. Case in point: pic.twitter.com/XfsGXORllJ

In the end, Middleton's girlfriend jumped in to absolve the cat of her sins ....

"I endorse your decision. Let her eat the pasta. Get the shot."

I endorse your decision. Let her eat the pasta. Get the shot. https://t.co/U8gtvi5Hto

... and recast her in a more, say, flattering light.

"My #AcademicCat #TheBansheeCat is really have her internet moment! She wanted me to show you she does not always look ferocious." 😂 😂 😂

My #AcademicCat #TheBansheeCat is really have her internet moment! She wanted me to show you she does not always look ferocious. pic.twitter.com/WV6ZfEgtdC

Do you break bread with your pets? Tell us about it in teh comments below!

Don't Put Food Down Around This Sneaky Cat Bagel-ar 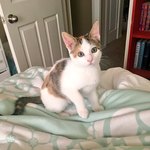 How to Train Your Cat to Give Kisses