Do You Like to Smell Your Pet? Here's Why

We all know that dogs have an amazing sense of smell. They love to come up and sniff our butts, our groins—basically all the spots that are drenched in our distinctive smells, but that are not polite to sniff in public. Dogs' incredible sense of smell even extends further, to the ability to sniff out everything from cadavers to bombs to cancer.

So taking a good whiff of a human body packs a lot of valuable information for a dog. But what about the other way around? Raise your hand if you've ever stolen a long, sweet sniff of your pup after work and felt an instant sense of calm and relief. If you raised your hand, you're not alone. And if you didn't—try it. Seriously, you're missing out!

What do humans get from taking in a good, long whiff of their favorites puppy (or kitten) odor? A lot, it turns out. Here's what you need to know about why we like the smell of our pets.

Smelling our pets can calm us.

There isn't a lot of formal scientific research to back this one up specifically, but the anecdotal evidence is overwhelming: Taking a good sniff of your pupper or kitten can have a wonderfully calming effect.

Michael W. Fox, the author of a newsletter and several books on animal care, welfare and rights, and a veterinarian with doctoral degrees in medicine and animal behavior, wrote about the phenomenon in column for the Washington Post.

In the piece, which was a response to letters from two readers describing their respective habits of smelling their dogs, Fox wrote:

"Your letters give support to pheromone research and marketing of dog-calming body scents for dogs, which you both find calming for yourselves!

We are losing our sense of smell, as well as other sensibilities, as we text and tweet with our less and less opposable thumbs in cyberspace. Engaging in a good dog sniff might be one way for us to recover our senses.

In other words: We're animals, just like our dogs are, are we get a lot of important info through our non-sight senses too.

Smelling our pets is a way to care for them.

In addition to just making us feel good, pet-sniffing is a way we can keep tabs on our furbabies' health.

"We can also use our sense of smell to help recognize when our dogs are not well and need a change of diet, or maybe just a bath," Fox explained in his Washington Post column. "For most healthy dogs, this is rarely needed, except for some breeds with oily skin and older dogs with various age-related conditions."

Smelling our pets helps us bond with them.

Dogs secrete pheromones from at least six distinct places, including places you'd expect, but probably don't spend a lot of time actively sniffing on your pup—like his butt and his genitals. But dogs also release pheromones from their faces and, very importantly, their ears. The pheromones released from a dog's ears trigger social cohesion among groups of puppies. It's not proven, by any means, but if you love to sniff you pup's ears and scalp, there's a chance you're honing in on the pheromones designed to make other living things bond to your dog, which would totally make sense.

Why Does My Dog Sniff My Crotch?

Can Dogs Smell Their Way Back Home?

Does Anything Stink To A Dog?

Range of Smell in K9 Dogs 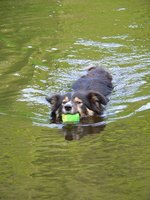 How to Make a Dog Smell Good With Vinegar