When the sun shines brightly through the windows, it's hard not to feel a bit of daylight joy. And when the clouds hang low and keep the skies gray, our moods tend to stay more on the gray side as well. There's no denying that the weather can have a major impact on our mood, but what do our cats think of the changing seasons?

Cats are extremely sensitive to the environment all around them, and that includes the weather. While scientists don't quite know all the details about how cats experience weather, it's clear that they do have a reaction.

Though cats don't have as wide a range as humans, cats definitely experience different moods.

Though cats are driven in a large portion by instinct, like their primal need to hunt and eat, cats have many more complex moods as well. Cats can feel joy and love, like when they're getting snuggles from their people. They can also get anxious, fearful, and sad. We can't read cats' minds, so we don't know exactly what influences their moods, but it's pretty clear that their environment plays a major role.

Cats like to watch and absorb everything from their environment. Cats spend a lot of time observing the world around them, including their humans. Cats can sense our moods and will often use that to determine their behavior. Knowing how closely they watch their surroundings, it seems clear that the weather would be another major factor in their feelings and moods.

Seasonal Affective Disorder, abbreviated as SAD, is a condition that humans experience in the winter months. It describes people who are mentally healthy during the warmer months, but during the cold and dark months of winter, they experience depression. Scientists don't know for certain what causes SAD, but they suspect the shorter days disrupt circadian rhythms, reduce melatonin production, and affect the brain in such a way that people tend to feel depressed during the wintertime.

According to a study in the United Kingdom, cats may experience some of the same changes in mood during the winter months that people do. The People's Dispensary for Sick Animals (PDSA) conducted a survey and found that nearly eight million pets showed signs that reminded them of SAD, including an overall "grumpier" mood. Elaine Pendlebury, senior veterinary surgeon with PDSA explained, "According to our poll, some pets display similar symptoms of the human disorder, SAD, which include fatigue, depressed mood and lack of energy. The change in our pet's mood may be simply due to the cold weather and fewer opportunities to stretch their legs outside, but diet and exercise can play a big part in perking up your pet."

So during the winter months, you may notice that your kitty is feeling a little glum because of the weather, so make sure to give them a few extra snuggles and a little more play time to help them cope.

Storms can put cats on edge.

Major storms often include heavy rain, high winds, lightening, thunder – plenty of things that can scare a full grown human. And cats aren't immune to that either. Cats have extremely sensitive ears that are not only hyper-sensitive, but also extremely good at pinpointing where sounds are coming from. They use their ears to observe and keep track of what's happening around them, but the loud and overwhelming noises caused by storms can be overwhelming, which usually puts kitties in a skittish and fearful mood.

Earthquakes and other natural disasters can put cats in a psychic mood.

Since at least 2,300 years ago (and possibly longer), humans have been fascinated by our animals' reaction to natural disasters. Though the evidence is mostly just anecdotal, animals like cats and dogs seem to react to natural disasters before we humans realize anything is wrong. In fact, it's been reported that cats have been seen moving entire litters of kittens in advance of major storms and earthquakes. Scientists don't know exactly why – possibly cats' superior senses just hear or feel things before humans or maybe they're tuned into electrical impulses we can't sense. Whatever the excuse, cats take on a bit of an eerie, psychic quality sometimes when major natural disasters hit.

So the next time you notice your cat in a weird mood, consider the weather. 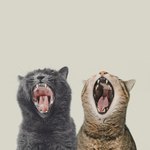 Are Cats Affected by Other Cats' Moods?

What is The Life Expectancy of a Cat?