How to Tell a Male & Female Quail Apart

The quail is a common game bird that can be found in most parts of the world. Its curved plume on the top of its head is its most defining characteristic and sets the quail apart from other pheasants. Species of quail are various, but the differences in gender are generally the same in all quail. Telling the difference between male and female quail, as with most fowl, is not difficult to do.

Look at the size of the quail. Females weigh slightly more than males, generally between 4 to 5 1/2 ounces. Males weigh in at 3 1/2 to 5 ounces. Look at the coloring of the quail's feathers. The male quail is much more brightly colored than the female.

Look at the plume on top of the quail's head. This is the defining characteristic of the quail, consisting of two feathers. The plume of the male will be more pronounced than that of the female.

Look at the patterns on the quail's face. The male will have bolder, more defined patterns than the female, as if he were wearing a mask. The female will be the same color all over.

Listen to the crow of the quail. Males have a characteristic crow best described as a clicking castanet. Males will crow through the night during mating season to attract the female. The female chirps but does not crow. 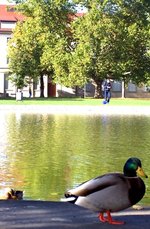 How to Tell a Male & Female Muscovy Duck Apart

How to Tell the Gender of Baby Sulcata Tortoises

Identifying a Snake by Color

Difference Between a Male and a Female Budgie