Are There Foods That Dogs Hate?

Given the fervor with which some dogs approach food, their owners would assume that dogs simply love it all, but do they have food preferences? Henry isn't making midnight runs for Ben & Jerry's, and he can't tell you how he feels about what's on the menu, so how do you know what Henry likes and what he doesn't?

Anyone who has ever loved a dog, or more than one dog, knows dogs are as individual as people, and their taste in foods can differ wildly as a result. However, interestingly, most dogs appear to show a distaste for citrus, such as oranges and grapefruits. Similarly, dogs tend to shy away from bitter apple, so much so that it's used in sprays that deter dogs from chewing certain objects such as very expensive shoes. However, some dogs in fact appear to like citrus, and some like the bitter apple smell, which renders it useless as a chew deterrent.

The bitter apple debate alone suggests it isn't likely all dogs dislike any one particular food, and there is no scientific proof, yet food studies take place every day. Henry's bowl is placed on the floor. If Henry turns away, perhaps he doesn't like the food, or something in the food, or maybe he just isn't hungry. The introduction of table food, or an excessive amount of treats, will also affect the way your dog approaches dinner time. If his kibble was laden with chicken parts last night, and they are absent tonight, it shouldn't be any wonder Henry won't eat his food. After all, ice cream and broccoli may not hold equal allure when your dinner bell rings.

Your dog's breed can also affect how he approaches his mealtime. The Labrador, for instance, will charge his dinner bowl as if it's a worthy opponent. Smaller breeds, such as Yorkies and Maltese, may approach their dinner plate with a pickier palette. One might suspect, if a dog can sniff out cancer or detect a bomb, it's possible he might be able to sniff out a dog food that is less nutritious than another choice. Dog food ingredients vary widely. Henry's food should contain proteins, vitamins and minerals, vegetables, carbohydrates and water. If his food is lacking, perhaps he can tell.

If Henry is normally a regular at his food bowl, and he suddenly shows little or no interest, it's time to see a veterinarian. He may need a change in food, but he may need dental care, or he may have a medical issue. There is no one more qualified to diagnose a potential issue than Henry's vet. It might not be his favorite place to go, but it might save his life, and you can always soften the blow with a dog-friendly treat.

The Bark; Karen B. London: Most Dogs Hate the Smell of Citrus
WebMD: When Your Dog is a Picky Eater
Dog Food Advisor; Mike Sagman: The Five Most Important Ingredients on a Dog Food Ingredients List
WebMD: Dog Not Eating? Possible Causes and Appetite Solutions
The Doginton Post: How to Deal With a Finicky Eater

About the Author
Catherine Holden Robinson is the award-winning author of "The House of Roses," and "Becoming Mona Lisa," the creator of the blog, Tommy's Tool Town, and has contributed articles as an animal advocate. Robinson resides in upstate New York, surrounded by pet hair.

Grieving Dog Saves Half Her Food For Sibling Who Passed Away

Why Do Dogs Hide Their Food? 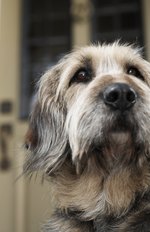 Why Does My Dog Paw His Filled Food Bowl?

What Is Chicken Meal in Pet Food?