Can a Lab Have Different Colored Puppies?

If you've wondered how a Labrador retriever of one color gives birth to purebred puppies of another shade, the answer lies in genetics.

Genetically, true Labrador retrievers are black, yellow or brown. The latter shade is usually referred to as chocolate. The noses and paw pads of black and brown Labs are always the same color as their hair. That's not true of yellow Labs, which can have black or brown paw pads or noses. If you're familiar with the breed, you know that "yellow" Labs range from practically white to deep gold. Currently, the gene causing the color variation in "yellow" isn't known.

All colors are not equal. Black color genes are dominant over brown. If both parents possess brown genes, brown puppies might arrive. Yellow is a recessive gene, so in order for breed for yellow pups, both parents must have a yellow gene. Since it's recessive, if only parent has a yellow gene, there won't be any yellow pups in the litter. If you breed two yellow Labs, you'll get yellow puppies since both carry the gene. If you breed a yellow Lab to a brown or black Lab, you could get some yellow pups in the litter if the brown or black Lab has a copy of the yellow gene.

To find out what hidden colors lie in your dog's genes, send test samples to a veterinary genetic service. This tells you not only what colors lie within your dog's genotype, but also which matings are likely to produce which shades. Veterinary Genetic Services gives an example: A black-nosed yellow Lab carrying hidden genes for black and brown mated with a brown Lab would produce a litter consisting of 50 percent brown and 50 percent black pups.

Beware of so-called silver Labradors. In the opinion of the Labrador Retriever Club Inc., the parent breed club for American Kennel Club registration, there's no such thing. While such a dog might resemble a silver Labrador retriever, the LRCI doesn't believe it's a purebred animal. Based on genetics, the LRCI suspects that the "silver" Labrador has Weimaraner in its bloodlines. According to the parent club, the AKC has registered some of these silver Labs, deciding that the silver color is related to chocolate. However, the LRCI states that their breed does not carry a dilute dd gene, adding "The Weimaraner is the only known breed in which the universality of dd is a characteristic."

About the Author
Jane Meggitt has been a writer for more than 20 years. In addition to reporting for a major newspaper chain, she has been published in "Horse News," "Suburban Classic," "Hoof Beats," "Equine Journal" and other publications. She has a Bachelor of Arts in English from New York University and an Associate of Arts from the American Academy of Dramatics Arts, New York City. 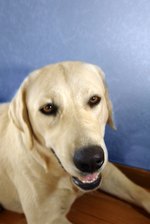 Which Dog Breed Has the Most Puppies in a Litter?

What Is a Piebald Dachshund?

What Is a Reverse Brindle Dog?