What are small, furry, weigh less than 10 pounds fully grown and come in the tiniest of sizes? Read on for the answer and you'll discover the adorable world of purr-fect, meowing, mini-kitties!

Small is in Big Demand!

Trendy is small and small is in demand today in the world of cats. Cat breeds like the Munchkin, the Cornish and Devon Rex and the American Curl are among the smallest of cat breeds (with the Sphynx and Peterbald being at the petite end of the spectrum) but the smallest of the small are the Russian Toy Bobtail and the Singapura.

This Russian Toy Bob miniature breed has been around for ten years and is considered to be the smallest of the small cat breeds. Its adult size is that if a normal domestic kitten weighing 3 to 5 lbs. Despite its tiny size they are healthy, alert and lively. It's short, straight, or curved bob tail forms either a brush or a mini-spiral. Toybobs are affectionate and seek human contact. They're a quiet breed that can easily slip under furniture or underfoot. They are also curious and extremely playful that do not require a ton of space -- only a ton of love and affection. This breed is very hard to come by (you may have to order years in advance if you find a breeder) and the prices are extremely high!

Once considered the smallest of cats, the Singapura is a completely natural and not a selective bred cat. It weighs in at around 4 to 8 pounds with some exceptions. Singapura, the Malaysian word for Singapore, is where this cat originates and are indigenous to South East Asia. This attractive cat is noted for its large hazel, green or yellow eyes and large ears. Their coat is brown ticked, their tail blunt, with the male having some nice distinct banding on their inside legs. At first glance some may think they're looking at a new color of Abyssinian, but closer inspection will reveal only the large ears bear similarities to the Abyssinian. The Singapura is extroverted and curious, very playful and insistent upon helping you with everything. This nondestructive breed will demonstrate their intelligence and interaction with everyone even as they become old. When you first meet a Singapura, you will definitely become captivated and entertained. Their pricing depends on their type, markings and bloodlines (usually around the $500 - $600 mark.)

This cute, relatively new breed of cat is known by its very short legs which are caused by a naturally occurring genetic mutation. The Munchkin cat was introduced to the general public in 1991 and even-though critics predicted the breed would have a number of health problems, the Munchkin was accepted by TICA into its New Breed development program. Still, a number of breeders do not accept the munchkin, stating that genetic mutations are abnormal and potentially disadvantageous to the cat. Munchkin owners and some breeders declare them a sound breed, ideal for apartment or small home living, who are not particularly susceptible to health problems. Nevertheless, this breed is described as people orientated, playful and sweet natured. This is an intelligent cat. Their short legs appear not to interfere with their mobility, such as running and jumping. Munchkins usually weigh from 6 to 9 pounds, with a medium plush coat that comes in all cost, colors, and patterns. They have slightly longer hind legs that can cause a slight rise from shoulder to rump. There is also a long haired variety. The short-haired variety has a medium-plush coat while the long-haired has a semi-long silky coat. Munchkins are priced at the $300 - $500 mark.

This long living domestic cat breed (originating from Cornwall, Britain) has no hair except for the down. (Most cat breeds have 3 different hair types in their coats. (1) the "guard hairs" or outer fur, (2) the awn, middle layer, and the (3) down or undercoat.) The Cornish Rex's sometimes curly but fine coat means they're best suited for indoor living in a warm, dry environment since they are sensitive to low temps (so don't be surprised if your Rex is curled up by your computer monitor, lights, or crawls onto your lap). The Cornish Rex is a playful breed with a sleek appearance and a galloping run which is why it is referred to as "the Greyhound of cats." They love playing fetch, do acrobatic jumps and competing with other animals. Adventurous, intelligent and curious, this cat loves to explore, is a great pet for timid children and likes people in general. The Cornish Rex is a cat that comes in many colors and patterns. The Cornish Rex's lifespan is between 10 and 15 years but one cat is believed to have lived to 37 years! Pricing ranges from $200 to $650 and even upwards to over $1000.

This intelligent short haired breed emerged in England in the 1960's. They're known for their large, rounded ears, their wavy coat and slender bodies. They're capable of learning hard tricks and are even known to recognize their owners names! Devon's are often called "pixie or "alien"cats" because of their unique appearance. Devons are very people oriented cats and are very mischievous, being described as a cross between a monkey, a cat, and a dog! They're high jumpers and love high places which is why you may find this kitty on a shelf in your closet. Their size ranges from 5 to 10 pounds and prices range from $800 to $1200.

This breed, about half the size of a house cat never exceeds 7lbs at maturity. Perfectly proportioned, their weight may vary but never exceed seven pounds at maturity. This cats personality can be varied, dependent upon their parentage. At eighteen months or older, this cat, at maturity measures 12 inches or less.

Until recently, miniature Persians were regarded as curiosities. Now there are several breeders in the USA, Canada and the U.K. These miniatures, although genetically smaller, carry the same physical features and personality traits as their larger counterparts. These mini-sizes vary based on the size they reach at 8 to 19 months of age. The mini-females weigh 6-8 lbs and males weigh 8-10 lbs. Pixie™ females are 4-6 lbs with males weighing in at 6-8 lbs. Teacups are the smallest category weighing a mere 2-4 lbs and Teacup males weigh 3-6 lbs. Other lines of Miniature Persians are MiniPers and MiniPaws.

Although the modern Siamese cat is smaller than the original cats imported from Thailand, true miniatures have been reported on occasion. In 2002 the breeding of miniature Siamese cats was discontinued because of miscarriages, kitten mortality and aggressive behaviors toward other animals, dogs included. Since then, these problem traits have been bred out.

Not An Exact Science

You should realize that breeding miniature cats is far from an exact science. The price you pay for your cat (some in upwards of $1500) may be all too pricey for the health problems that could arise from some cross bred cats, unless they are a stable breed. Also consider that your small cat may, at their adult size, suddenly become a normal sized cat! Apparently some miniature cats do not produce miniature offspring, probably because genetic dwarfs also carry the gene responsible for normal sized cats.

How to Buy a Norwegian Forest Cat 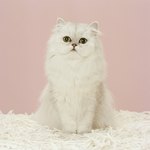 The Differences Between Ragdoll & Birman Cats

How to Identify a Persian Cat