Do Dogs Whine When They're Bored?

"I'm boooored!" Kids (and even some adults!) are known to groan this phrase whenever the doldrums strike -- but do pooches also whine and complain when there's nothing to do?

If you've got a bored canine sitting on your floor, contemplating how he can get rid of his boredom, you're almost certainly going to hear barking and whining. Sometimes he'll also blow air through his nose or let out a sighing-bark combination. He's trying to make noise to get your attention. He can't talk, so whining is the next best thing. Some pups will get their favorite toy, run up to you, nose you and whine as they walk in circles. Others just let out the obnoxious sounds as they're lying on the floor. The remedy's simple: Give your pup more play time! Tire him out so much that instead of head-butting you and being noisy, he's knocked out in his bed. Create puzzles for him to solve, play fetch, throw a disc outside, take him to the dog park or act silly and run around the house.

So you just played a long game of fetch and you're tuckered out but your pup is still whining. This is usually a case of either him needing something or wanting something -- and yes, there's a big difference. He needs water, food and a nice patch of grass to do his business on. He doesn't need a belly rub when you're trying to do housework after a long play session. Most canines will let you know what exactly they need. If his food bowl is empty, your pup might lick the dry bowl. If he wants out, he might pace by the door or nose his leash. If he needs something, by all means get it for him, but only after he stops whining. This also goes for anything else he wants. You can certainly give him a nice ear rub, but only after he stops begging for it. You don't want your pup to associate whining with a reward.

When you walk into the house, your pup might greet you with a song of whines and cries. He's so happy and excited that you're home that he starts making all kinds of noises, some of them exceptionally loud. This isn't indicative of boredom. If it bothers you, keep his toy basket near the door and direct him to a ball or fuzzy sheep. The toy will keep him quiet and content until he gets over the excitement of you being home.

Anxious pups often whine, cry, bark and let the world know that something is troubling them. This isn't the case with every dog. Some maintain their silence in worrisome situations, like big, bad thunderstorms. Anxious whining won't improve on its own. You'll have to countercondition your pup to be less afraid, or even accepting, of whatever's causing his fear, or talk to your vet about possible medications. If your pup's anxious, you'll see other symptoms aside from whining. He may tremble, point his ears backward, lower his tail or tuck it between his legs, flee to a spot he thinks is safe or even act destructive, such as with separation anxiety.
Medical

Just as people let out grunts and moans when they're in pain, dogs whine when they're not feeling well. Sometimes the whining is constant, especially with a constant pain, such as a toothache. Pains that come and go or are worsened by an action, such as peeing with a urinary tract infection, may elicit whines only at times when the pain is triggered. Unexplained whining -- nothing related to boredom, needs or wants -- warrants a vet appointment, especially if symptoms such as lethargy, appetite changes, stool changes, vomiting and general weakness accompany the whining.

PetPlace.com: Dealing With Whining Dogs
Vetstreet: Why Does My Dog ... Whine So Much?
American Society for the Prevention of Cruelty to Animals: Whining

About the Author
Located in Pittsburgh, Chris Miksen has been writing instructional articles on a wide range of topics for online publications since 2007. He currently owns and operates a vending business. Miksen has written a variety of technical and business articles throughout his writing career. He studied journalism at the Community College of Allegheny County.

Can Dogs Damage Their Vocal Cords by Barking?

Why Does My Dog Hide Under The Bed?

Why Does My Dog Howl & Bark At Nothing?

Why Does My Dog Bark At Me?

Why Does My Dog Nibble With His Front Teeth? 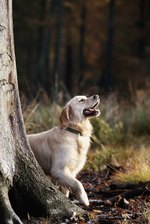 What to Do for Dogs Who Are Hoarse?