How to Teach Kids to Respect Dogs

A kid who respects dogs is not only a well-behaved kid, he's also a kid who won't get bitten. Many dog bites occur because children don't know how to treat and respect their dog at home, as well as dogs in general. So if you think letting the kids jump on the dog, pull his tail or try to play "horsey" with him is funny, think again. The earlier you begin "training" your kids, the better!

Young children should be given clear rules regarding behavior around dogs as soon as possible. For example, "no touching Doggie while he's eating" should be the first one. "No touching Doggie while he's sleeping" should be the next one, even if your dog doesn't actually mind being touched while he's napping. This is because toddlers might not understand the difference between "touching" and "hugging, tickling or lying on Rover's tummy." And while Rover might be OK with some gentle touching, he might NOT be OK with somebody digging between his toes when he's trying to get some shut-eye. Best to teach very young children to keep their hands off a sleeping pooch entirely. Rules can change as kids get older and have better control and understanding of their own actions. For example, a toddler might think it's cute to hug Doggie and kiss him -- except that in the excitement, he might half-choke the dog and annoy him to a point where Rover can't take him anymore. Once your toddler gets older, he can learn how to hug and kiss without the choking, so you can relax the rules then.

Also, some dogs get nervous or annoyed (which may lead to aggression) around screaming or running children, and this is an important lesson for children. If your dog gets nervous easily, explain to your children that they should try to remain calm down around dogs, or else take their play elsewhere. This is especially important if you have a hyper dog or whenever he's around dogs you don't know.

Teach and Practice How to Pet

Teach your child the proper way to pet Doggie and practice on stuffed animals and/or your own arm. This means using open hands -- rather than touching or hitting the dog with toys or other objects -- and applying a soft touch. You should also make it clear what types of touch are NOT allowed. For example, no hair pulling and no ear or tail pulling. No sitting on Rover or doing anything that might be painful. Even young kids understand what things cause an "ouch," so use their own vocabulary when trying to explain what they're not supposed to do to Rover.

"Our" Dog vs. Strange Dogs

Make sure kids understand the difference between their dog and a strange dog. Toddlers who live with a loving doggie at home might think all dogs are the same. Tell kids they should never approach or pet a dog they don't know. Also, no staring directly into the dog's eyes -- dogs may interpret this as confrontation.

Give Them a Job

Get kids involved in the care of your dog. Even toddlers can do basic things such as filling the water bowl. Teach your kid how to groom Doggie -- unless Rover hates being groomed, and then it's best if you do this on your own -- and how to give basic commands.

About the Author
Tammy Dray has been writing since 1996. She specializes in health, wellness and travel topics and has credits in various publications including Woman's Day, Marie Claire, Adirondack Life and Self. She is also a seasoned independent traveler and a certified personal trainer and nutrition consultant. Dray is pursuing a criminal justice degree at Penn Foster College.

13 Things People Do That Dogs Hate 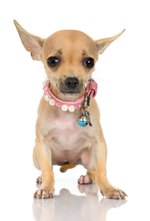 How to Discipline Chihuahua Puppies

Ways Dogs Communicate With Their Paws

Why Would a Puppy Growl at Kids?