My Dogs Bites When I Try to Crate Him

There are bad behaviors, and then there are really bad behaviors. Your pup biting you when you put him in his crate is an example of the latter. Biting should, under no circumstances, be tolerated. Furthermore, if the biting is aggressive (rather than snapping or mere nipping) this isn't a problem you can work out on your own. You'll need the help of a professional. In the meantime, forget about crating and think about doggy-proofing a room instead.

Any way you cut it, your pup's tendency to try and bite you when you shuffle him into his cage clearly points to aggressive behavior. It doesn't mean your little guy's not sweet and friendly, but in this instance, he's aggressive. His aggression likely stems from frustration, pain or fear. If you push or pull him into his crate, he may be hurting where you're touching him. If he's reacting out of fear, something has scared him, typically either a poor approach to getting him in the crate -- pulling, pushing, yelling -- or the crate itself, often from a bad past experience. A frustration response often builds over time from your pup associating feelings of restraint with the crate. When he's in there, he can't reach the things he wants -- be it you, the kitty or guests -- so he begins likening the crate with something that aggravates him.

Your pup's snapping habit when you try to crate him comes with two primary dangers. The obvious danger is injury. A powerful jaw clamping down on your hand, even for a fleeting moment, will send you to the hospital for stitches. The second danger isn't so obvious, but it's no less frightening: Your pup learns that trying to bite you is the correct response for whatever feeling the crate brings out, be it fear, frustration or pain. When you pull away and stop forcing him into the crate, he thinks of his antics as a means for victory: snapping at you stops whatever feeling he's overcome with. Anytime he experiences that feeling -- such as when you try to put him in the car -- he may react aggressively.

You can train your pup to learn lots of tricks, react positively to thunder and learn that the vacuum isn't out to hurt him, but you shouldn't personally try reversing his aggression. You can try your hand at most types of counterconditioning, but the dangers that go along with trying to countercondition an aggressive dog are better left to a professional. Talk to your vet to rule out pain-aggression, and then chat up a certified dog trainer who has experience working with aggressive dogs.

You're not a genie, unfortunately, so snapping your fingers and summoning a dog trainer to your house right this instant isn't in the cards. If your pup needs crated, you have to do something until his training commences. Whenever you need to crate him -- when you leave or at night, for instance -- place him in a doggy-safe room that keeps him away from trouble. He shouldn't have access to anything he can destroy. If you don't have a mostly empty room or one that you can easily dog-proof, section off a small empty part of it with a gate or some kind of barrier so he can't reach anything that he can chew on. When you lead him to the safe room, do so with positivity. Never shove him inside, pull him, yell or become frustrated. Treats, a warm smile and an excited voice work best. When it's bedtime, you might want to keep him in your room, so long as he doesn't destroy anything.

About the Author
Located in Pittsburgh, Chris Miksen has been writing instructional articles on a wide range of topics for online publications since 2007. He currently owns and operates a vending business. Miksen has written a variety of technical and business articles throughout his writing career. He studied journalism at the Community College of Allegheny County.

Calming a Hyper Dog in the Car

How to Stop a Dog From Barking at Visitors

How to Get a "Fear Biter" Dog Out of a Crate

Why Does My Dog Nibble With His Front Teeth?

Why Would A Dog Bite His Owner? 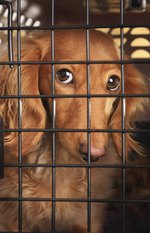 How to Get a Puppy to Stop Whining in a Crate