When Can A Puppy Start Training Classes?

Training and socializing your puppy from an early age is vital if you want a well-behaved dog. Those who don't undergo early socialization are far more likely to later be re-homed or even euthanized. In theory, it's never too early to go to puppy classes, but some concerns exist around exposing your pup to other dogs before they are fully vaccinated.

The Importance of Early Socialization

Between the ages of 3 and 12 weeks old, puppies are at their most tolerant of any new experiences. As they get older, they become less and less accepting of anything they're initially wary of. Well-socialized dogs are more relaxed and easygoing, therefore making life less stressful for both you and them. Dogs who are poorly socialized may display fear or aggression when confronted with something new and unfamiliar. As such, you should take your canine companion to puppy socialization classes or meetings as early as possible, preferably shortly after you first take him home at about 8 weeks old.

While there is a risk of illness by taking puppies who aren't fully vaccinated out of the home, the American Veterinary Society of Animal Behavior believes that this small risk is outweighed by the negative effects of poor socialization. If you wait until your puppy has had all his shots -- around 16 weeks old -- he will be outside the critical window for socialization. Don't take your puppy to a potentially unclean area, such as a dog park. A well-supervised puppy playtime on a freshly sanitized floor poses no major risks. Make sure your pup has had at least one set of vaccinations at least seven days before attending his puppy class and that the other puppies attending have as well.

While puppy obedience classes are important, you should wait until your puppy has had all his shots before attending. This should be when he's roughly 16 weeks of age. Of course, you can get started at home before this by teaching him a few simple commands, such as "sit" and "stay." Remember that training for puppies should be kept brief and enjoyable so as not to discourage them.

Training classes aren't just for puppies, your dog can keep learning for years to come -- what they say about old dogs and new tricks simply isn't true. Make sure you attend classes that teach positive reinforcement. Any class that talks about punishment, discipline or teaching techniques such as "alpha rolls" -- where dogs are flipped onto their backs and held in that position to assert your dominance -- should be avoided. As highly intelligent animals, dogs love learning and keeping their minds and bodies active. For instance, older dogs may enjoy participating in agility or heel-work to music.

About the Author
Lauren Corona has worked as a writer since 2010. She has penned articles for a range of websites and print publications, specializing in animal care, nature, music and vegan food. She holds a Bachelor of Arts in English and American literature, and a postgraduate diploma in print journalism.

How to Introduce Your Puppy to the Older Resident Dog

How Long Does It Take to Housetrain a Dog? 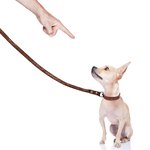 When Can I Walk My Puppy After Vaccinations?

Do Dogs Start Lactating Before or After Giving Birth?