1. Being raised by wolves would have made him much more normal.

2. Fetch is easy. Not sure why dogs make a big deal of it.

Is it OK to call cat "good boy" if he acts like a dog?

3. Batting at dangling objects is also easy. Two can play that game. (Hover to play.)

A dog that looks and acts like a racoon.

5. So dog-like, he totally blends.

6. I have the zoomies. Because I am a puppy.

7. Humans are technically animals too, and this dog has nailed acting like a human child.

8. This dog did even better at human baby.

9. This panda is the best human though. He totally captures the boredom of being on a plane for hours and hours.

10. Cats don't get to corner the market on excessive self-grooming.

11. I went into my chrysalis a regular pug and emerged a beautiful butterfly.

12. What is this witchcraft?

14. Let's cuddle human! I'm an animal that is not terrifying to cuddle with.

15. Since we're both dogs, we should probably play together. Like dogs do, fellow dog.

17. This is a totally normal way to lay down because I'm a normal cat.

20. Just waiting for my pink to come in.

21. This Christmas, we'll be starring in the Rudolph reboot and that's totally normal and not weird at all.

22. Just two puppies, playing in a yard. Neither of us is a pig, for sure.

23. Just a lion here. No tigers definitely. It's honestly weird that you would even say tiger.

28. I have no hands and thus no nails. Move along.

How about some more photos of adorable and hilarious animals? Scroll through this gallery of pets who are ready to quit their day jobs and then take a look at this rescued chipmunk who discovers fresh, clean sheets!

15 Cats Who Are Totally Humoring You 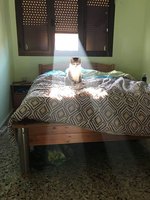 44 Pets Who Are Not Impressed By Your Snapchat Filters

Just 15 Of The Cutest Rats Ever