Most pet owners know not to feed their dogs chocolate or grapes, but what about some of the spices we used to season our food? Nutmeg is a spice that many people use in stews and curry dishes, and can be a seasonal favorite to dress foods up with during the fall and winter seasons. When it comes to nutmeg, it's best to keep this seasoning away from your canine friend, as large amounts of the substance can yield alarming symptoms.

Where does nutmeg come from?

Most people recognize nutmeg as a ground, brown colored spice that comes in a jar, used to season dishes and drinks around the fall and winter season. That spice comes from the seeds of an evergreen tree known as Myristica fragrans, which is native to the Spice Islands of Indonesia, and is refined both there and in the West Indies. The covering, or arail, of the nutmeg seed produces a spice called mace, which is described as a mixture between pepper and cinnamon. Despite the moniker, the mace associated with nutmeg is in no way related to the mace used as a self defense spray, and is safe for humans to eat.

The simple answer to this question is "no," they cannot. According to Pet Poison Helpline, nutmeg can be dangerous as it does contain a toxin called myristicin. For some people and pets, even consuming a small amount of nutmeg can result in minor stomach irritation. If someone were to deliberately eat a large amount of nutmeg, they could become poisoned and may experience symptoms such as increase in heart rate, increased blood pressure, seizures, disorientation, and even hallucinations.

Since nutmeg is more dangerous in large quantities, and most recipes call for a very small amount of it, chances are, if your dog has stolen a bit of nutmeg-seasoned, the outcome will not likely be fatal. However, small, lightweight dogs and dogs with existing health issues are always more prone to negative reactions, and sometimes it can be hard to tell how much a dog has eaten. To be on the safe side, be sure to wrap up and keep your nutmeg-laced foods out of your dog's reach, and never let them have access to the spice cabinet or spice bottles, even if they are empty, as some spices can be incredibly dangerous.

What are the concerns with feeding nutmeg to dogs?

Even if, in some cases, a little bite of food seasoned with nutmeg won't lead to lasting damage, the symptoms associated with nutmeg poisoning can be harmful to dogs.

Disorientation: A disoriented dog can incur problems from falling, running into walls and other objects, and becoming lost, to nausea and vomiting if loss of balance or compulsive circling occurs.

Signs of nutmeg poisoning in dogs

To sum things up, nutmeg is considered a "do not administer" ingredient for dogs, as ingestion of the spice can yield uncomfortable and even dangerous symptoms, like high blood pressure, increased heart rate, and hallucinations. However, most dogs would need to eat a large amount of the spice for consumption to be a severe threat. Regardless, it's best to abide by the better safe than sorry rule, and resist offering your dogs bites of nutmeg-seasoned foods. To ensure your dog's safety, check out our definitive list of everything dogs can and cannot eat.

Everything Your Dog Can and Cannot Eat

Reasons Why Dogs Froth at the Mouth

How To Protect Pets From Car Engine Fluids

What Happens If A Dog Eats a Cigarette Butt? 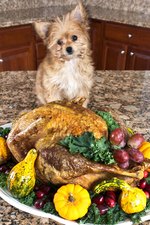 Thanksgiving Leftovers You Can Give Your Pet (And Those You Can't)