Differences Between a Toy Maltese & a Teacup Maltese

Nowadays, dogs seem to get smaller and smaller, and often this is attributed to the fact that dog owners living in apartments want dogs that are easy to take care of, requiring little exercise regimens, and capable of easily fitting into a purse or even a pocket. Maltese dogs are already small, toy dogs weighing at the most seven pounds, but some breeders have been working on considerably reducing their size to produce teacup variations. There are several differences between toy and teacup dogs both in physical characteristics and in the ways they are bred.

Obviously, the most distinct and significant feature that differentiates toys and teacups is size. Regular Maltese dogs are small dogs categorized by the American Kennel Club under the toy group. But teacups are significantly smaller when compared to a regular Maltese. To better get the idea of their petite size, teacup Maltese are so small that you can easily fit them in a teacup when they are puppies, hence their name.

Of course, with smaller sizes come also lower weights. A regular Maltese according to the American Kennel Club's standards should be expected to weigh under seven pounds, with specimens weighing four to six pounds much preferred. Teacups on the other hand, weigh significantly less, and are expected to generally weigh somewhere in between two to four pounds.

Regular toy Maltese dogs are obtained by reputable breeders using traditional breeding methods that focus on improving the breed. But not many people know that in reality, teacups are premature puppies, technically speaking '' runts of the litter'' that are selectively inbred with mostly size in mind. No responsible Maltese breeder would ever breed a female that weighs considerably less than the standard and pass on undesirable genetic flaws.

Weighing and being so little however does not come without significant risks and health problems. Teacup Maltese therefore are significantly prone to health issues when compared to regular Maltese. Conditions common in teacup Maltese are low blood sugar, dental problems, seizures, fragile bones, and significant heart problems just to name a few.

Despite teacup Maltese not being recognized as a breed on their own by the American Kennel Club, unethical breeders use the term ''teacup'' as a marketing ploy, making potential buyers believe they are producing something particularly scarce and precious. Therefore, they will typically ask a premium for teacup Maltese specimens, considerably much more than what one would expect to pay for a regular sized, much healthier Maltese.

What Is a Throwback Pomeranian?

How Long Do Puggles Live?

What Is the Life Span of Maltese Dogs? 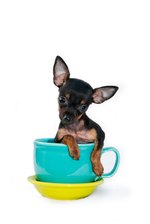